The IAS officer, Sreeram Venkitaraman, has been admitted in a private hospital 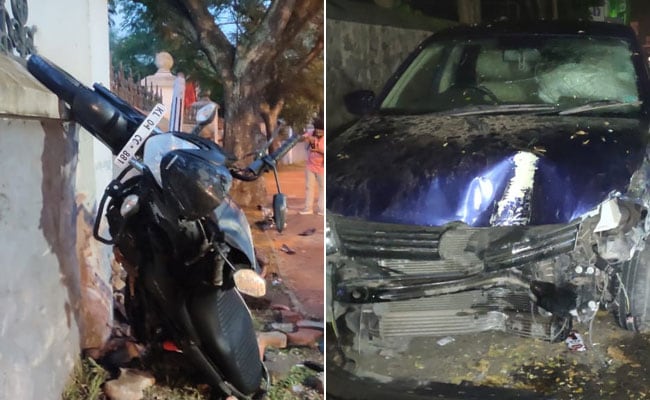 The crash took place near the government museum on Vellayambalam Road in Thiruvananthapuram.

An Indian Administrative Service officer who allegedly hit a journalist on a motorcycle with his speeding car on Friday, killing him on the spot, has been sent to judicial custody for two weeks, the police said today.

The IAS officer, Sreeram Venkitaraman, has been admitted in a private hospital. On Saturday night, the judicial magistrate went to the hospital and remanded him into custody, though he will remain to be in hospital during the remand period.

The police said he would be taken to jail when the doctors allow him to be discharged after treatment.

Apart from Mr Venkitaraman, a woman was also in the blue Volkswagen car, the police said. "There were conflicting statements. We have now confirmed from independent witnesses that Sreeram Venkitaraman was driving the vehicle," Thiruvananthapuram police chief Dhinendra Kashyap told news agency PTI.

As allegations of conspiracy for a cover-up surfaced, police sources confirmed that Sriram Venkataraman, 33, initially refused to give his blood sample for testing. "When someone refuses to give blood sample, there are legal procedures that need to be initiated, which include arrest, and the blood to be taken by a government doctor. But eventually, the man agreed for his blood sample to be collected. He had certainly consumed alcohol, because the initial medical report states of smell of liquor," a police source told NDTV.

The officer's blood sample was taken for testing at around 10 am on Saturday.

"I was returning after watching a movie. At around 1 am, I saw a car bang into the wall. Initially I didn't see anything else. Then I saw a bike rammed into the wall. Eventually, I saw a man exit the driver's seat," Joby G, an eyewitness, told NDTV. His statement has been taken by the police.

Images from the accident site -  near the government museum on Vellayambalam Road - showed the motorcycle upside down against a compound wall and the car badly damaged in the front.

Parts of the motorcycle and the car were strewn around and Mr Basheer's slippers and some others were found metres away from the accident spot. Blood stains were seen on the road.

Cases of rash driving and "punishment for culpable homicide not amounting to murder" have been registered.

Kerala Chief Minister Pinarayi Vijayan, Leader of Opposition Ramesh Chennithala and the minister for temple bodies Kadakkampally Surendran were among those who expressed grief at the death of the journalist.

Transport Minister AK Saseendran said IAS officers should set an example for others by following rules and regulations strictly. Steps would be taken to cancel the driving license of the accused, he told reporters.

Kerala Union of Working Journalists (KUWJ) has demanded a fair investigation and has written to the Chief Minister and the Kerala police chief.

Mr Basheer has a wife and two children.

Mr Venkitaraman, also a Medical doctor and Fullbright Fellow, had recently returned to the state after completing higher studies abroad. His friend who accompanied him owned the Volkswagen sedan. In 2017, when Mr Venkitaraman was a sub collector, he had hit out hard against illegal constructions in Idukki district.