With Rajeshwar Reddy's victory, the Telangana Rashtra Samithi has won both seats in the high-stakes Graduates' MLC constituency elections. 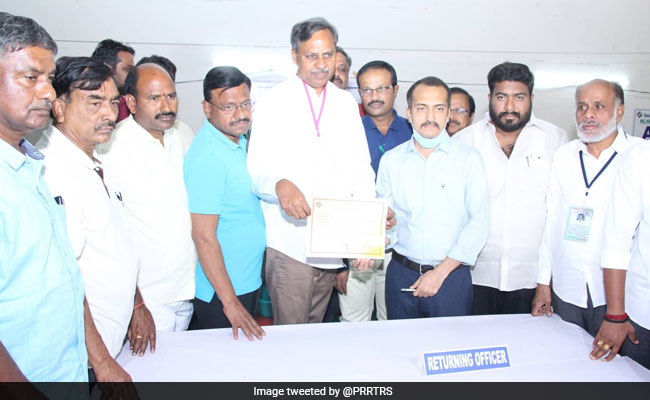 Rajeshwar Reddy received the certificate of election from the Returning Officer.

He beat his nearest rival Teenmar Mallanna, an independent, by 12,806 votes.

He received the certificate of election from the Returning Officer, Prashant J Patil.

With Reddy's victory, the Telangana Rashtra Samithi has won both seats in the high-stakes Graduates' MLC constituency elections.

Both Mr Reddy and Vani Devi thanked the electorate for reposing faith in them and said the results proved that the people are with Chief Minister K Chandrasekhar Rao.

Both TRS nominees had been maintaining a lead over their rivals since the counting of votes began on Wednesday and it continued till Saturday as jumbo-sized ballot papers were used in view of the large number of candidates and also because the voters exercised their franchise in a preferential method.

Polling was held on March 14 for the two Graduates' constituencies.

The total number of voters in the two constituencies is over 10 lakh.

As many as 93 candidates were in the fray from Mahabubnagar-Rangareddy-Hyderabad constituency, while 71 nominees contested from the Warangal-Khammam-Nalgonda constituency.