In Telangana Caste Killing, 1 Crore Contract And An ISI Angle

Pranay Kumar was killed by a man in Nalgonda in front of his wife Amruthavarshini Rao on Friday.

"My father used political leaders to put pressure on me and Pranay," said Amrutha

Days after a 23-year-old engineer was hacked to death with a machete while escorting his young, pregnant wife out of a hospital in Telangana, seven men, including the killer, have been arrested in Bihar, the police say. The gang was hired for Rs 1 crore to do the job, police sources told NDTV.

The gang is believed to have links to the Pakistani Inter-Services Intelligence (ISI), the sources said.

The killer is believed to have been convicted and later released in the 2003 murder of former Gujarat minister Haren Pandya.

On Friday, Pranay Kumar had just left the hospital in Nalgonda with his wife Amruthavarshini Rao after a check-up when a man came at him with a machete and struck him until he collapsed and died. Security footage of the murder at the busy hospital has shocked the country.

Amrutha has named her father Maruthi Rao and uncle Shravan Rao as the main suspects. 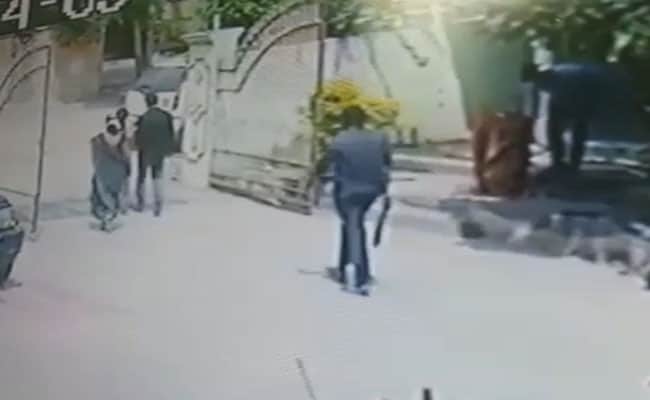 The engineer's murder was caught on hospital security footage in Nalgonda

Maruthi Rao, a real estate businessman, is among the "richest and most influential" in the region, say police sources.

The police suspect Amrutha's father set up the kill as he could never accept his daughter's marriage to Pranay, who belonged to a scheduled caste.

"We were always worried that there is a threat from my family and even went into hiding for some time, but we did not anticipate cold-blooded murder," said Amrutha.

Pranay and Amrutha married in January, defying their parents. They had met in school and became involved while studying in college. In May, Pranay's family came around and organized a reception for the couple. Photos of the event on social media allegedly incensed Amrutha's father.

Amrutha told NDTV that her father had been trying to force her to have an abortion. "I have no intention of aborting my baby. Pranay's baby is my future...he was such a nice person. He looked after me so well, especially after I became pregnant," the 22-year-old wept.

In her police statement, Amrutha has said: "Investigate my father's property and wealth." She also says her father has links with many politicians.

"My father has powerful political connections. He used political leaders to put pressure on me and Pranay and his family," Amrutha says in her statement.

Local politicians from various parties are being investigated in the case.