Will "Explain The Truth" To Jayalalithaa Probe Panel: O Panneerselvam

Following J Jayalalithaa's death in December 2016, suspicion on the circumstances leading to her death was raised by several people, including O Panneerselvam and his followers. 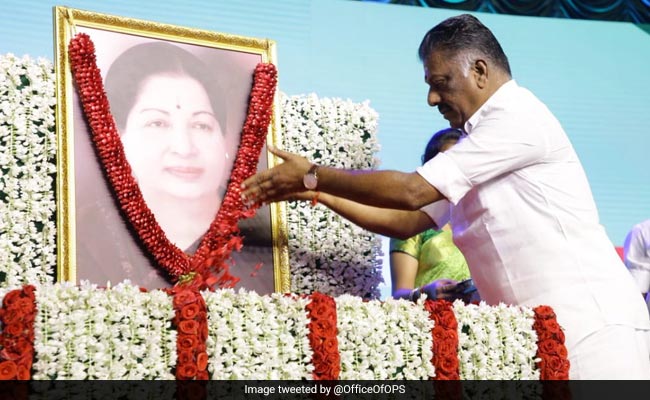 O Panneerselvam was earlier summoned to appear before Jayalalithaa probe panel on January 23.

Tamil Nadu Deputy Chief Minister O Panneerselvam on Wednesday said he was ready to appear before a commission probing the death of late chief minister J Jayalalithaa and "explain the truth".

The AIADMK Coordinator said he was earlier summoned by the one-man Justice Arumughaswamy Commission to appear before it on January 23.

However, he could not appear on that date due to the Global Investors' Meet scheduled then and that he had informed the same in writing, he told reporters in Chennai.

"I had informed (the panel) that I would appear later on a date mentioned by the commission," he said, responding to questions on the matter.

However, the commission had later adjourned the proceedings, he said.

"Whenever the Commission summons me, I will (appear before it and) explain the truth and my stand. The truth will be known there," he said.

Following Jayalalithaa's death in December 2016, suspicion on the circumstances leading to her death was raised by several people, including O Panneerselvam and his followers.

O Panneerselvam who had turned a rebel leader after the death of J Jayalalithaa had demanded either a judicial inquiry or a CBI probe into her death.

A staunch loyalist of J Jayalalithaa, he took over as chief minister immediately after her death, but soon after resigned and later accused the late leader's close aide VK Sasikala of bringing pressure on him to quit.

The demand for probe was a key precondition put forth by the erstwhile Panneerselvam-led faction for merger with the group led by Chief Minister K Palaniswami.

After the unification of the factions in August 2017, the government notified constitution of the commission headed by retired Madras High Court judge A Arumughaswamy.

The panel's terms of reference was to inquire into the circumstances and situation leading to the hospitalisation of J Jayalalithaa on September 22, 2016 and treatment provided till her death on December 5 that year.

So far, it has examined a number of people, including state Health Minister C Vijayabaskar and representatives of Apollo Hospital, where Jayalalithaa was treated.