Read inOther Languages
This Article is From Jun 24, 2019

Chennai is facing a 40 per cent cut in piped water supply as all four reservoirs outside the city have gone dry. The city requires 525 million litres of water per day 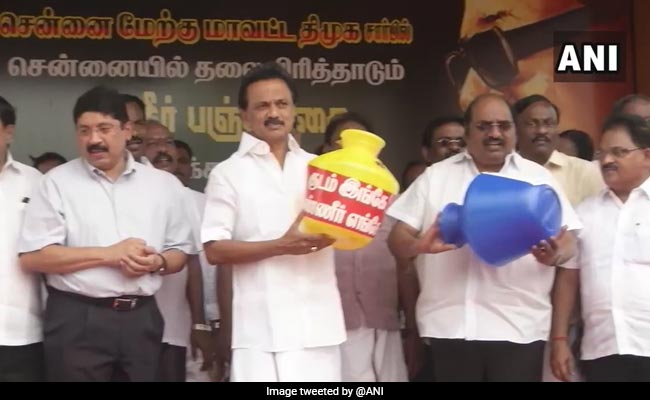 MK Stalin, leader of the main opposition party in Tamil Nadu, today joined protests led by his party - the DMK - against the AIADMK government's handling of the ongoing water crisis. The southern Indian state has been fighting a water shortage for several months. State capital Chennai has been forced into 40 per cent cut in piped water supply after four city reservoirs - the main sources of drinking water - dried up.

"The one question being asked by people across Tamil Nadu is 'where is the water'? The AIADMK government has not completed any drinking water project in the state. Its party officials are holding yagnas in temples -- not for the rains, but to protect their own government," he said.

Today marks the third day of protests by the DMK. In a press release issued Saturday, the party asked district secretaries to stage protests with support from the public.

Mr Stalin also criticised the AIADMK for "irregularities" in the construction of an extra desalination plant.

"This government lies continually. I would order probe into desalination plant irregularities soon after coming to power," the former Deputy chief minister said, predicting, "There would be a change of Govt in Tamil Nadu even without fresh elections."

Chennai needs 800 million litres of water per day (MLD) against a current supply of only 525 MLD. To help deal with the crisis Kerala Chief Minister Pinarayi Vijayan had last week offered to send 20 lakh litres of water to Chennai.

Tamil Nadu Chief Minister E Palaniswami welcomed the gesture but asked instead for 2 MLD, saying, "We are everyday supplying 525 MLD water (in Chennai) and if 2 MLD water could be given every day, it will be useful for the people."

The groundwater in Chennai and its surrounding areas is replenished by five lakes - Puzhal, Sholavaram, Kaliveli, Pulicat and Maduranthakam - all located within a 60-kilometre radius of the city. However, encroachments on these water bodies, a long-standing issue, have significantly reduced each lake's ability to hold water and replenish underwater tables.

The state government last week announced that 10 million litres of water would be transported to the capital, from northern parts of the state, at a cost of Rs 65 crore.

The Chief Minister has acknowledged that drought and deficient monsoons have resulted in depletion of groundwater levels, but has claimed the issue is not as big as it ha been described by the media.