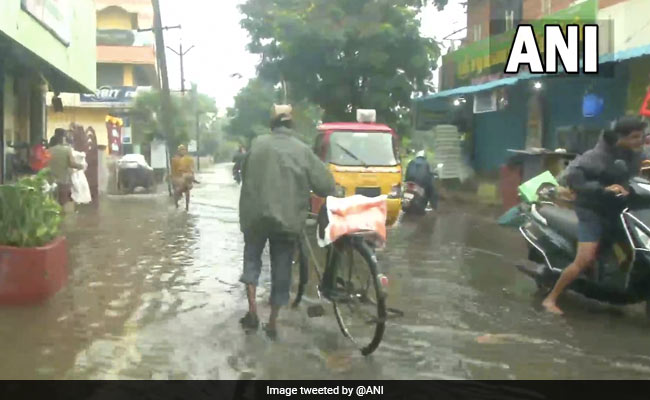 Till 5.30 am, Chennai received 4.9 cm rainfall while Puducherry recorded 8 cm.

Heavy to very heavy rainfall was predicted in 24 districts of Tamil Nadu and Puducherry today, according to the weather department's forecast. The Tamil Nadu region has been reeling under waterlogging and flooding over the weekend.

Several districts of Tamil Nadu have announced holiday in view of the rain situation. Schools and colleges remain closed today in Chennai for the second consecutive day. The civic authority in Chennai has advised people to stay home. Private offices have been advised to allow work from home.

Authorities have deployed 41 boats in vulnerable areas of Chennai while seven additional inflatable boats have been kept ready too.

So far, five rain-related deaths have been reported from the state while 538 huts and 4 houses have been damaged. Sixteen cattle have died too. Over 300 people are currently accommodated in relief camps.

The Tamil Nadu government has appointed five senior bureaucrats as nodal officers to monitor preventive measures and relief in Chennai and neighbouring Chengalpattu.

Here are the Live Updates on Tamil Nadu rain:

Amma Canteens Started By J Jayalalithaa To Serve Free Food In Flood-Hit Chennai
People in flood-hit Chennai will get free food at "Amma canteens" run by the municipal agency, the Tamil Nadu government said today. The free-food programme will run till the time Chennai sees rainfall, Chief Minister MK Stalin said.
The Amma canteen concept was started by former Chief Minister J Jayalalithaa as a subsidised food programme for the public. It was an instant hit. The programme was seen as one of the best methods to provide good quality food at the lowest cost.

With the onset of northeastern rains, Chennai received the heaviest rains in the past six years, recalling the 2015 floods. It resulted in flooding in the central and northern parts of the city.
Nov 09, 2021 15:27 (IST)

5 Dead, 538 Huts Damaged In Tamil Nadu Amid Extremely Heavy Rains
At least five persons died and as many as 538 huts and four houses have been completely damaged in Tamil Nadu due to incessant rains.
Nov 09, 2021 13:58 (IST)

"What Did You Do Since 2015 Floods": Court Pulls Up Chennai Civic Body
The Chennai civic body was pulled up today by the Madras High Court, for the huge flooding the city has been struggling with for the last four days. The court warned that it would take up the matter on its own if the situation does not improve by Sat
Nov 09, 2021 13:27 (IST)
Madaras High Court warns Chennai Corporation

Madras High Court on Tuesday warned Chennai Corporation for "failure to take adequate measures to prevent inundation in city during rains". The Court asked the civic body what were the authorities doing after the 2015 floods.

The court also warned that suo motu proceeding would be initiated if waterlogging situation not brought under control.

Tamil Nadu CM MK Stalin inspected rain-affected areas of Kolathur and Villivakkam in Chennai, where he distributed food and relief materials to the needy people pic.twitter.com/p9AYGbmV6g

Schools and colleges in the Madurai district of Tamil Nadu will remain closed due on Tuesday to heavy rainfall, the District Collector said on Tuesday.

Nov 09, 2021 09:07 (IST)
Free Food For People In Slums, Low-Lying Areas: Chennai Civic Body
The civic authority in Chennai will be distributing free food in slums and low-lying areas in view of the rain situation. People have been advised to store adequate drinking water and keep devices charged, and to stay home. Schools and college remain closed today in the Tamil Nadu capital. Private offices have been asked to allow work from home.