The Madras High Court ordered the relocation of the three elephants to a camp in Tamil Nadu's Tiruchirappalli. 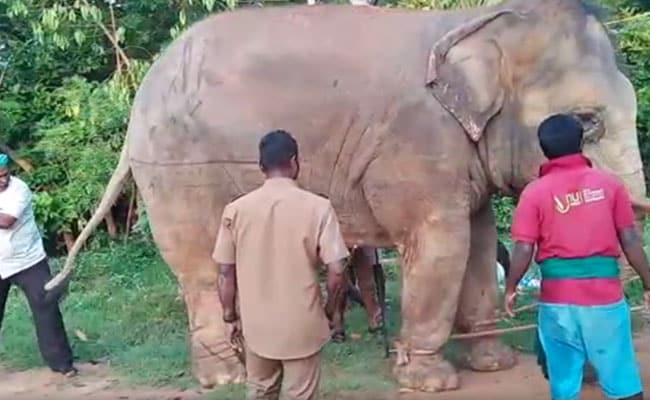 Mahouts can been seen beating the elephants and pulling the rope to make them walk.

Three elephants belonging to the Kanchi Mutt in Tamil Nadu were hit with a stick by forest officials, tied with ropes and pulled on Friday morning, visuals of which were captured on mobile phone, sparking outrage among animal rights activists.

Forest officials beat the elephants with a stick when they did not get on to a truck at a private forest which has been their home for the last three years. The authorities were trying to take the elephants to Tiruchirappalli.

The Madras High Court had recently ordered the relocation of the three elephants to a camp in Tiruchirappalli.

In one of the disturbing clips, two elephants are tied together on their four legs with a rope. Mahouts can been seen pulling the rope with all their might to move the animals. Men with sticks beat the elephants from behind, trying to make them walk.

The elephants were moved out of the Kanchi Mutt in Kanchipuram district to the private facility a few years ago for a period of three years, following non-compliance of rules on captive elephants.

Forest authorities have denied the allegations of abuse, claiming trained men were called to transport the elephants.

Animal rights activists slammed the forest officials, calling it a violation of the Prevention of Cruelty to Animals Act.