The BJP leader uploaded a video of her visit on Twitter in which she is seen speaking to Kathir, the driver, and offering sweets to his family 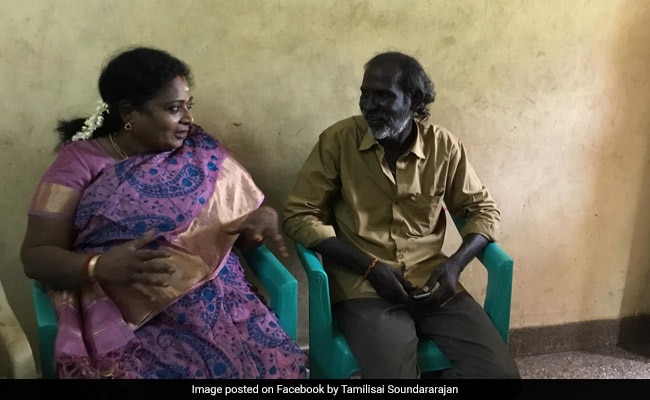 After an elderly autorickshaw driver in Chennai was allegedly manhandled for asking Tamil Nadu BJP chief Tamilisai Soundararajan difficult question around the rising fuel prices during an interaction with reporters, Ms Soundararajan today showed up at his home with sweets. She asked about his well-being and clarified that she was unaware of the incident and the whole episode was wrongly interpreted.

The BJP leader uploaded a video of her visit on Twitter in which she is seen speaking to Kathir, the driver, and offering sweets to his family.

A Friendly visit to house of Auto driver kathir today who wanted to speak to me.he himself acknowledged that no one hurted him. Request media friends to ignore false propoganda. pic.twitter.com/vcHEZ27x76

In a video that went viral and broadcast widely on local channels on Sunday night, Kathir, who was standing behind Ms Soundararajan, can be seen being elbowed twice and roughed up by BJP leader V Kalidass after he raised the issue of fuel price hike.

The video also shows the state BJP chief smiling, seemingly oblivious, while the man was being allegedly assaulted behind her.

"I only expressed my anguish over the rising fuel prices and how auto drivers are among the worst affected, but they took it in a wrong sense," Kathir told reporters.

Ms Soundararajan, however, said that the autorickshaw driver was drunk when the incident happened, according to news agency ANI.

"The media is projecting it as if I was smiling when he was beaten up. I had heard him and a reporter asked the same question. So I was responding to the media and didn't notice what was happening behind me," Ms Soundararajan told reporters today.

"It was my co-worker who pushed him aside as he was drunk. If it (manhandling) happened, it was wrong, but he was removed keeping others' safety in mind," she said.

Earlier this month, Ms Soundararajan had filed a complaint against a research student for allegedly raising "anti-BJP" slogans.

Lois Sofia, an Indian research scholar in Canada, and Ms Soundararajan were on the same flight to Tuticorin when she shouted "down with Modi, BJP-RSS fascist government".

Ms Sofia was arrested at the airport after the flight landed and Ms Soundararajan told reporters, "She was not an ordinary passenger. I suspect some extremist organisation behind her."

Justifying her complaint, the BJP leader accused the student of "planning the ruckus".

"No innocent girl will use the word fascist," she added.