"I thank the Kerala Chief Minister, but 2 MLD (million litres per day) water will not be sufficient. We are everyday supplying 525 MLD water (in Chennai) and if 2 MLD water could be given every day, it will be useful for the people," Mr Palaniswami said.

The AIADMK leader urged his Kerala counterpart Pinarayi Vijayan to also extend cooperation in storing water to the full level in the Mullaperiyar dam. Referring to a Supreme Court judgement on the Mullaiperiyar dam which had said that water could be stored to the full level of 152 ft after it was strengthened, he alleged that Kerala, however, had scuttled refurbishment efforts.

Satellite image provided by Maxar Technologies shows Puzhal reservoir in Chennai before and during drought.

We need every drop of water," he said, adding people in five districts, including Theni and Ramanathapuram were dependent, on Mullaiperiyar water for their livelihood.

He appealed to the people to use water judiciously and added that even though Chennai's Poondi, Chembarambakkam, Sholavaram and Red Hills reservoirs had dried up, the government was supplying water to the people.

Mr Palaniswami's reaction came after Kerala Chief Minister Pinarayi Vijayan's office said that its offer to send 20 lakh litres of water to Tamil Nadu has been turned down by the neighbouring state.

"In response to our offer, we have been informed that at present Tamil Nadu have sufficient supply and doesn't require additional assistance from Kerala," Mr Vijayan wrote on Facebook. 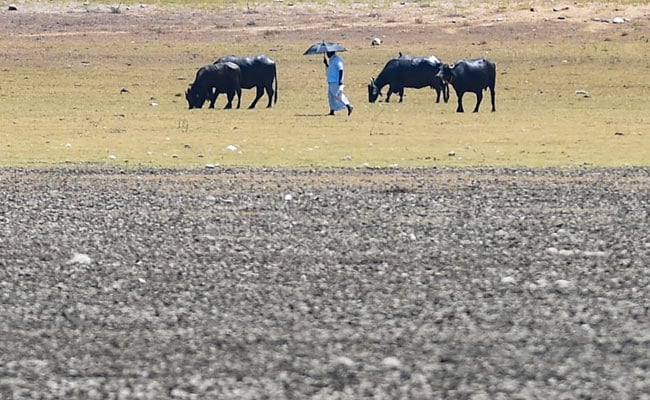 A view of Poondi reservoir, one of the major water sources to residents of Chennai has gone bone dry due to acute water shortage

Chennai is facing a severe water crisis after its four reservoirs - the main sources for drinking water in the city - turned dry and ground water levels plummeted due to scanty rain.

The authorities in Chennai have cut water supply by 40 per cent. The shortage of water has hit information technology firms, five-star hotels and high-rise buildings. Among the dried-up reservoirs is Chembarambakkam lake, Chennai's largest source of drinking water. The lake is bone dry with a parched and cracked bed.