Kamal Haasan Off To A Good Start, May Turn Key Player In Tamil Nadu Polls

Dr R Mahendran, MNM vice-president and its candidate from Coimbatore, clocked the best performance in the just-concluded Lok Sabha elections with 1.45 lakh votes or 11.6% of the total vote share. 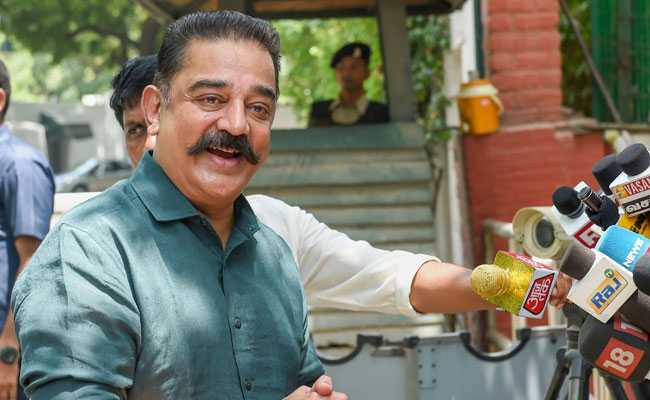 Kamal Haasan has admitted that the MNM has a long way to go before it becomes a force to reckon with.

Actor-turned-politician Kamal Haasan's Makkal Needhi Maiam (MNM) may have drawn a blank in the Lok Sabha polls, but its electoral performance hints at a potential threat to the AIADMK and the DMK in the 2021 assembly elections. The MNM secured 3.72 per cent votes in the 35 constituencies it contested in, which is no mean feat for a party that was launched just over a year ago.

Dr R Mahendran, MNM vice-president and its candidate from Coimbatore, clocked the best performance in the just-concluded elections with 1.45 lakh votes or 11.6% of the total vote share.

M Sridhar, the party's Sriperumpudur candidate, polled 1.35 lakh votes - translating to a vote share of 9.63% - against DMK stalwart TR Baalu. Kamal Haasan expressed his appreciation with the results, but admitted that they still have a long way to go.

"The average vote share came up to nearly 5%. This is a great start, given our short time in existence. We are committed. We are considered as an alternate. We have stood our ground," he said, thanking the people for "accepting" the 14-month-old party.

However, the party did not fare well in rural areas. For instance, its Thanjavur candidate Sampath Ramadoss - a US-returned techie - got only 23,477 votes while its Kanniyakumari candidate J Ebenezer secured the lowest at 8,590. "We could have done better if we had spent money on putting up posters and banners in rural areas. We had fund constraints," Mr Ramadoss told NDTV.

Incidentally, actor-turned-politician Vijayakanth's DMDK had scored a vote share of 8.4% and won one seat during its electoral debut in the 2006 assembly polls. It won 29 seats with a vote share of 7.9% in alliance with the AIADMK in 2011.

"The journey could be a long one. There are those who even had to undergo a 13-year vanvas (exile) before finally emerging successful," Kamal Haasan said, tacitly referring to the DMK's 13-year wait for power after AIADMK founder MG Ramachandran became the Tamil Nadu Chief Minister in 1977.

The MNM, which distanced itself from the Congress, BJP as well as Dravidian parties in the state, had made fighting corruption and creating opportunities in rural Tamil Nadu its core issues in the Lok Sabha elections. Besides this, the party also promised 50 lakh jobs, free drinking water supply, equal wages for women and doorstep delivery of ration supplies in its manifesto.

Many believe Kamal Haasan stands a good chance in Tamil Nadu politics in the absence of veteran leaders such as Jayalalithaa and Karunanidhi. However, that doesn't necessarily guarantee immediate returns. While R Gayathri, a resident of Mylapore, claimed that it didn't make sense to vote for the MNM in the Lok Sabha elections, M Partheeban said he did not want to waste his vote on an "inexperienced" Kamal Haasan.

Dr R Manivvanan, Head of Department of Political Science at the Madras University, claimed that there was a big difference between the voter base of Vijayakanth and Kamal Haasan. "While Vijayakanth largely appealed to rural voters, Kamal Haasan has an urban outreach. But Kamal Haasan definitely has the potential to make it big in the coming assembly election," he said.

However, P Varun - a young voter - believes that only an alliance can help Kamal Haasan. "That's the reality. People want to continue sticking with their old parties, and many don't want to give newcomers a chance," he said.