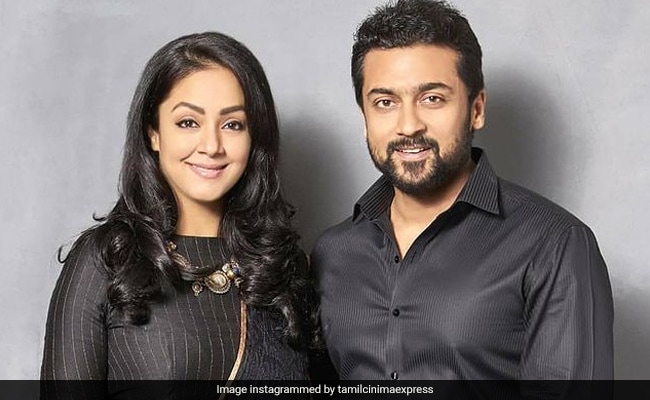 Actor Suriya has thanked his fans for their "overwhelming" show of support in the wake of threats and a legal notice over his new film 'Jai Bhim'. Suriya tweeted Wednesday evening after armed police were deployed at his home in Chennai's T Nagar area following threats of violence against the 46-year-old.

Support was widespread and the hashtag #WeStandWithSuriya emerged as a top trend on Twitter.

"Dear all, this love for 'Jai Bhim' is overwhelming. I've never witnessed this before! Can't express in words how thankful I am for the trust and reassurance you all have given us. Heartfelt thanks for standing by us," the actor tweeted.

Dear all, this love for #Jaibhim is overwhelming. I've never witnessed this before! Can't express in words how thankful I am for the trust & reassurance you all have given us. Heartfelt thanks for standing by us ✊????

Among those to tweet with the hashtag #WeStandWithSuriya and show support was fellow Tamil filmmaker Venkat Prabhu, who tweeted: "Stand by what is right even if it means standing alone."

Stand for what is right even if it means standing alone#WeStandWithSuriya#JaiBhim ???? pic.twitter.com/FDCe60sOiy

Actor Krishh tweeted: "He who can see the invisible, can do the impossible..."

"He Who can see the invisible, Can do the Impossible..." @Suriya_offl#WeStandWithSuriya#Jaibhimpic.twitter.com/NkvGqiaHjt

The Tribal Army Twitter handle also spoke out, posting: "We support social justice. We support humanism. We are against casteism. We support Inclusiveness. We support holistic development of this society. We support Truth And so #WeStandWithSuriya."

We support Social Justice, We support Humanism, We are against Casteism, We support Inclusiveness, We support holistic Development of this Society. We support Truth And so#WeStandWithSuriya@Suriya_offlpic.twitter.com/7AoVzMjB4J

Several others also tweeted, including the All India Suriya Fans Club, which urged their hero to not dignify his detractors with a response. Journalists praised the actor for the film and its message.

Tweets also seemed to come in from fans in neighbouring Kerala and Andhra Pradesh.

Security around Suriya's home has been increased after a member of the PMK (a regional political party) offered Rs 1 lakh for anyone who physically attacked the actor. The PMK leader - S Palaniswamy - has been booked by the police, news agency ANI reported.

Suriya (who also produced 'Jai Bhim') and the film's director have also been named in a legal notice - that claims Rs 5 crore in damages and warns of criminal cases - filed by the Vanniyar Sangam, a group that represents the Vanniyar community that is dominant in northern parts of the state.

The PMK community spearheaded protests for reservation for the Vanniyars, who have been classified as a Most Backward Community in Tamil Nadu.

The scenes that have triggered the controversy include a shot that shows a man from the Vanniyar community torturing a man from the Irula tribal community. The Vanniyar Sangam claims the scene "denigrates" the community, and has questioned the renaming of the character to Gurumoorthy.

The Sangam has also hit out at another shot that features a communal symbol; this has since been replaced by the image of a deity, so as to not hurt religious sentiments.

The Tamil-language film (also available in Hindi and Telugu on Amazon's Prime OTT) is a powerful courtroom drama inspired by human rights activist and former Madras High Court judge Justice Chandru, who fought against the persecution of oppressed sections of society.

Suriya plays Justice Chandru, who fights for justice for a Irula woman whose husband died in police custody. Earlier the actor wrote to CPM leader K Balakrishnan - who requested financial help for the woman, Parvati Ammal - and said he would deposit Rs 10 lakh in her account.