Borewells and wells have gone dry in parts of Tamil Nadu, forcing the people to rely on depend on private water tanker operators for their needs. 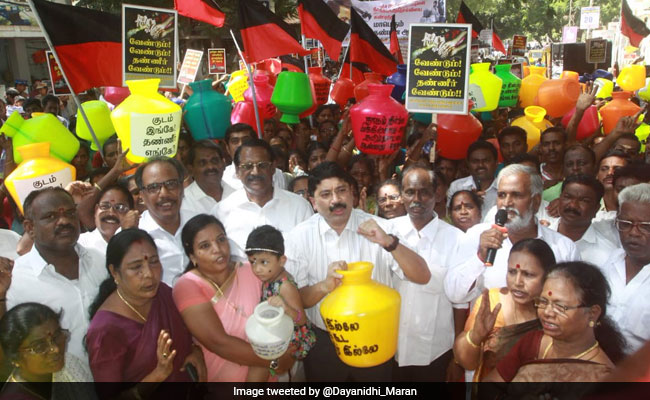 The DMK on Saturday began state-wide protest accusing the Tamil Nadu government for its "negligence," and "administrative failure" in tackling the acute shortage of water in the state.

DMK lawmaker Dayanidhi Maran and other senior leaders were seen holding empty pots in Chennai as they held protests and raised slogans against the chief minister K Palaniswami and the state government.

The little water in Chennai today is the result of Dr.#Kalaignar's efforts to set up 2 desalination plants to supplement water supply. In the last 8 years, if the AIADMK govt had expanded the projects the #DMK created, we wouldn't be in such a crisis today. #ChennaiWaterCrisispic.twitter.com/TZpxGWnEjm

Borewells and wells have gone dry in parts of Tamil Nadu, forcing the people to depend on private water tanker operators for their needs. Residents in Chennai are also facing a tough time as the city witnessed a 40 per cent cut in piped water supply.

"It is a total failure of the Tamil Nadu Government. They should have assessed the need and availability of water in the state. Since last year there has been low rainfall. They should have made alternate arrangements," DMK MP TKS Elangovan said.

The Madras high court had recently slammed the state government for not taking enough measures to contain the crisis.

The state government has said it was largely dependent on ground water to meet the requirements till the onset of north east monsoon in October.

Chief Minister K Palaniswami has said drought and deficient monsoon last year had resulted in depletion of groundwater levels, but claimed the issue was not as big as was being made out, especially in the media.

On Friday, Mr Palaniswamy chaired a high-level meeting with senior ministers, water department and other senior officials in attendance. "The water table has drastically gone down in the city and the four reservoirs that were water sources to the city have completely dried up. In spite of this, 525 millions of litres per day (MLD) are being supplied to the city by Chennai metro and an additional 200 MLD of water is being supplied through desalinisation plants," Mr Palaniswami said.

He revealed that the government plans to bring an additional 10 million litres of water per day (MLD) through railway tankers from Jollarpettai.

The shortage of water has hit information technology firms, five-star hotels and high-rise buildings in Chennai. Among the dried-up reservoirs is Chembarambakkam lake, Chennai's largest source of drinking water. The lake is bone dry with a parched and cracked bed.