Accompanied by former Union telecom minister A Raja and other colleagues, MK Stalin went to the RR Anbu Biryani restaurant and spoke to the owner and employees. 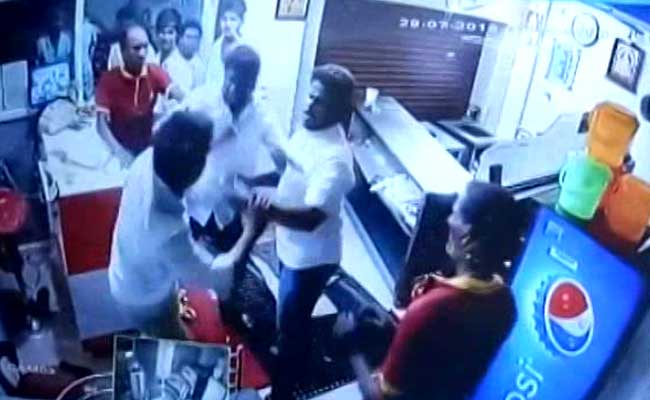 A video from the spot showed the DMK men landing punches left and right, targeting anyone within reach.

DMK chief MK Stalin on Thursday visited the restaurant where two of his party workers went on a rampage on Sunday night. The party had suspended the men, who went berserk and beat up the restaurant employees after they were told that the kitchen had closed.

"Anyone who is acting in the form of discrediting the DMK and wasting the labor of millions of volunteers -- will never hesitate to take undue action against them," Mr Stalin said. Accompanied by former Union telecom minister A Raja and other colleagues, Mr Stalin went to the RR Anbu Biryani restaurant and spoke to the owner and employees.

Owner RR Tamilselvan praised the DMK leader. "I don't have any words to say. Even when his father, a great leader, is admitted in hospital, Stalin came to our restaurant and comforted us all," Mr Tamilselvan was quoted as saying by news agency IANS.

"Earlier he had called us to the DMK headquarters and inquired about the incident and the damages," he said, adding that Mr Stalin has also promised to make good the losses.

The two DMK men had gone to the restaurant on Sunday night as thousands of their party colleagues kept vigil outside Chennai's Kauvery hospital, waiting for news of ailing M Karunanidhi.

That evening, the 94-year-old DMK patriarch had taken a turn for the worse. He recovered later in the evening, but the party workers had refused to disperse.

Just 10 km away, at restaurant, Yuvaraj and Divakar could not control their temper when they were told the kitchen had shut and there was no food to be had, the restaurant staff said.

The men lashed out. A video from the spot showed them landing punches left and right, targeting anyone within reach. The staff had a tough time pulling them away, the video showed.

The police are still hunting for the men, who are absconding.