Forest minister K Ramachandran personally monitored the process at Kozhikmudi camp in Topslip in the district, where 28 elephants underwent the test. 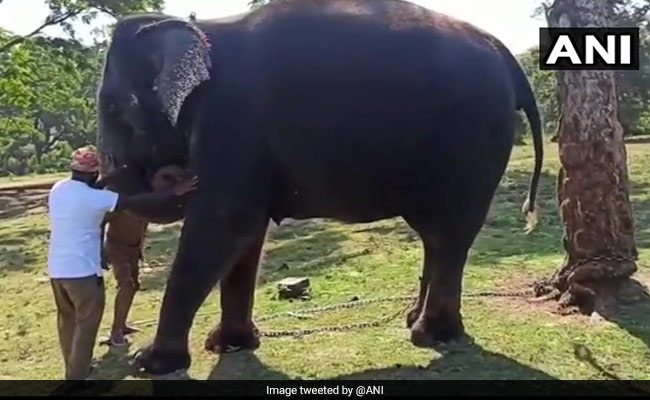 The camp has 18 male and 10 female elephants.

Swab tests were carried out on 56 elephants on Tuesday at two camps in Coimbatore and Nilgiris districts, days after a lioness succumbed to COVID-19 and nine others in the pride tested positive for the infection at a zoo in Chennai, news agency PTI reported.

Forest minister K Ramachandran personally monitored the process at Kozhikmudi camp in Topslip in the district, where 28 elephants underwent the test.

The camp has 18 male and 10 female elephants, of which three are kumkis (tamed elephants), five 'safari' elephants and four aged ones, an official release said.

A total of 60 mahouts and assistants and their family members got vaccinated in the camp, thus becoming the first one in Tamil Nadu where 100 per cent got vaccinated, it said.

The minister distributed a total of Rs 3.5 lakh to families affected by elephant attacks in the area.

He also distributed uniform for staff of anti-poaching squad and PPE Kits to forest guards, the release said.

Meanwhile, samples of all the 28 elephants in Theppakadu camp at Mudumalai in Nilgiris district were also collected this morning.

A total of 52 mahouts and 27 kavadies (assistant to mahouts) there were vaccinated against Covid-19.

Mr Ramachandran ordered samples to be collected from all the elephants and send them to the Indian Veterinary Research Institute at Izatnagar, Uttar Pradesh for testing, forest department sources said.

The testing is being done after a lioness at the Arignar Anna Zoological Park at Vandalur in Chennai died due to coronavirus on Thursday, and nine of the 11 in the park tested positive for COVID-19.