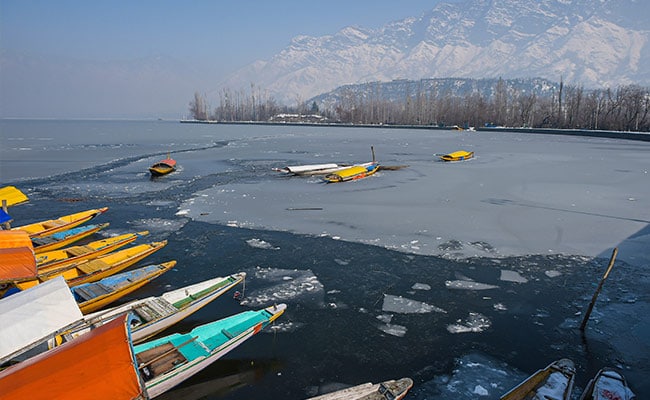 Srinagar has issued an advisory to avoid walking, playing on the frozen Dal Lake.

Authorities in Srinagar on Thursday deployed State Disaster Response Force (SDRF) personnel at the Dal Lake, which has frozen due to record low minimum temperature in Kashmir, to prevent people from walking on the frozen surface of the water body.

"Due to freezing temperatures, many water bodies in the valley, including the world famous Dal Lake have frozen. It has been observed that some people, particularly youth and children attempt to walk on the frozen water bodies," Aamir Ali, Nodal Officer of the State Emergency Operation Centre, Srinagar said.

Mr Ali said that moving on this thin layer of ice, particularly the Dal Lake, is very risky and can result in slips, falls, fractures and fatal injuries.

"When the thickness of ice is less than four inches, it is very unsafe to walk, or play and the ice can break resulting in drowning. There are many springs inside the Dal Lake and the ice is very thin at these spots and it's difficult to spot these locations while walking or playing on the ice surface," he said.

Ali said the district magistrate Srinagar has issued an advisory to dissuade people from walking, playing or moving on the frozen Dal Lake, as it is unsafe.

He said action will be initiated against anyone trying to violate these instructions.

"Quick Response Teams (QRTs) of the State Disaster Response Fund (SDRF) and River Police have been deployed in the Dal Lake, as a precautionary measure," he added.