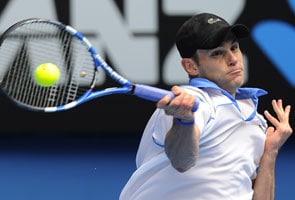 Andy Roddick is feeling comfortable and at ease with his game as he bids to reach his first Australian Open final in nine attempts.

The American power-server is a four-time semi-finalist at Melbourne Park, and is taking it one step at a time after seeing off 99th-ranked Igor Kunitsyn 7-6 (9/7), 6-2, 6-3 in the second round.

The eighth seed, who faces a potential quarter-final with defending champion Roger Federer, will take on either Dutchman Robin Haase or Argentine 26th seed Juan Monaco in the third round on Friday.

Roddick has been waiting for over seven years to win his elusive second major after the 2003 US Open, but said he feels comfortable with the state of his tennis under veteran American coach Larry Stefanki.

"Well, I get to play again so that's all you want," he said after mastering Kunitsyn in 2hr 3min on Rod Laver Arena.

"I'm serving very well. Kind of controlling the match with that right now. That's always a good thing for me.

"For me that just comes with playing matches. I've certainly been out on the court enough the early part of the season in Brisbane and now here so I feel comfortable out there right now."

Roddick's weapon serve was humming along at 67 percent first serve and he pounded down 17 aces as he broke Kunitsyn three times.

"I thought he played well. He was very convinced of his game plan and executed it well," he said.

"I don't think he wanted to settle into long points. He was taking the first ball, going up the line with it and was converting for pretty much all of the first set.

"So I definitely wasn't comfortable early on in that one."

Roddick, who reached this month's Brisbane International before being beaten by Robin Soderling, said once he worked out Kunitsyn's game he was able to control the play.

"I got on to his pattern a little bit. I played him a couple times before and he wasn't as quick to pull the trigger on his forehand," he said.

"He likes going up the line with his backhand so I was able to adjust and get the ball to where I wanted to, where I was pushing to his forehand side.

"Then I felt the dynamic of the point started shifting to my direction."
Comments
Andy RoddickAustralian Open 2011