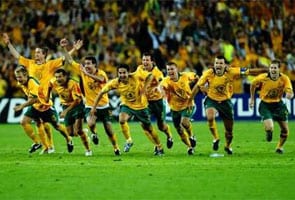 Football penalty shootouts give an unfair psychological advantage to the team that shoots first according to new research from the London School of Economics and Political Science (LSE) published on Thursday.

Now Professor Ignacio Palacios-Huerta, from the LSE's department of management, has suggested football chiefs switch to a tennis style tie-break system, during which players can have two consecutive serves, in a bid to make shootouts fairer.

Palacios-Huerta and co-author Jose Apesteguia, an associate professor at Pompeu Fabra University in Barcelona, studied 2,820 kicks from shootouts in major national and international competitions between 1970-2008.

"Most TV channels cut to the commercial break when the coin is being tossed to decide which team takes the first penalty - but our findings show that this could be the deciding moment after a drawn match," Palacios-Huerta said.

"The coin gives a 20 percent advantage to the team that shoots first. The psychological pressure of 'lagging behind' clearly affects the performance of the team that kicks second."

The research, published in the American Economic Review, is said to be the first study of its kind.

Palacios-Huerta and Apesteguia studied films of the penalty coin toss in 20 matches. In every case, except one, the winner of the toss chose to take the first penalty.

The exception was Italy-Spain in the 2008 European Championships - Italy won the coin toss but opted to go second and Spain won the shootout.

The researchers also interviewed 240 players and coaches - both professional and amateur. Almost all said they would prefer to take the first kick and 96 percent said this was to put pressure on the team kicking second.

"I suspect that the heads of FIFA or UEFA are not going to like the fact that the winner of the World Cup, the European Championship or the Champions League is decided, in part, on the 60-40 flip of a coin," Palacios-Huerta said.

In a football penalty shoot out this pattern (ABBAABBAAB etc) would repeat until the ten penalties had been taken or the shootout won.

Promoted
Listen to the latest songs, only on JioSaavn.com
"This pattern of penalty taking would greatly reduce the unfair 'first mover' advantage since the second team is not always trying to play 'catch up' and the problem of leading or lagging would be compensated for," Palacios-Huerta said.

"Not only would it be more fair, but it would also be much more entertaining for neutral fans."