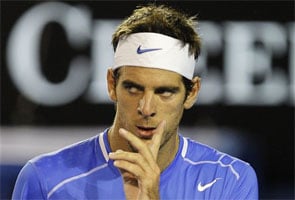 The last man to win a Grand Slam -- who is not named Rafa or Roger -- was eliminated from the Australian Open on Thursday.

Juan Martin del Potro, winner of the 2009 US Open and the emerging star of that season, spent most of 2010 recovering from surgery on his right wrist.

The 22-year-old Argentine returned to Melbourne for his first Grand Slam event in a year, but he has not returned to top form.

"It's very tough. I'm still improving," del Potro said, adding that he played better than he had last week in Sydney, his comeback tournament where he exited in the second round. "I think that's positive for the next tournament."

Del Potro called the trainer on three consecutive changeovers during the second set to have his wrist examined, but later said it was "just for safety" after making a "bad movement" while serving. He remains the only player to have defeated both No. 1 Rafael Nadal and No. 2 Roger Federer at a Grand Slam tournament.

The 21st-seeded Baghdatis said his tactic was to fire fast balls at del Potro and to keep him running, knowing that "he didn't have a lot of matches under his feet." He faces No. 11 Jurgen Melzer of Austria in the third round.

Working mother Kim Clijsters took the opportunity to clarify on center court at the Australian Open that she is not pregnant with No. 2.

Add one more rule to the adage that you should never ask a woman if she's pregnant: Don't text message the question to her friend, either.

Former Australian tennis star Todd Woodbridge learned that lesson the hard way. And Clijsters reveled in publicly chiding him, in one of the more amusing on-court interviews at a Grand Slam tournament.

The US Open champion had just won her second-round match Thursday, swiftly beating Carla Suarez Navarro 6-1, 6-3, and was greeted by Woodbridge for an on-court interview.

"You thought I was pregnant?" she lightheartedly asked Woodbridge, drawing stadium-wide laughter as she informed him she had seen the text message he'd sent to Australian doubles player Rennae Stubbs.

"Are you?" he asked, blushing.

"No, I'm not" she said, leaning into his microphone to broadcast that his message said Clijsters "looks really grumpy" and more busty than usual. Woodbridge joked that his TV career was now over.

The 27-year-old Clijsters, known as one of the friendliest and polite players on the women's tour, later said she'd enjoyed the playful banter.

Stubbs had shown Clijsters the text message a day earlier while they were chatting about "babies and having a second one," the Belgian said. When Thursday's match ended and Clijsters saw Woodbridge was her interviewer, she chuckled.

Motherhood clearly agrees with Clijsters' career. The former No. 1-player took time off the tour when she married and had a child -- daughter Jada, born in February 2008. She returned from a 2 1/2-year retirement to win the U.S. Open in 2009, just three tournaments into her comeback.

The accomplishment made Clijsters the first mother to win a Grand Slam singles title since Evonne Goolagong Cawley at Wimbledon in 1980. In tribute to motherhood -- and to the Australian tennis great -- Clijsters is wearing a green shirt-and-skirt outfit at this year's tournament that was inspired by what Goolagong wore in her Grand Slam win.

Clijsters said that her sponsor, Fila, also sponsored Goolagong and came up with the idea.

David Nalbandian used up so much energy in his five-set, first-round marathon against former No. 1 Lleyton Hewitt, he felt "empty" by round two.

Only two nights after extinguishing Australia's best hope in the men's draw, the 29-year-old Argentine retired from his second-round match Thursday against Richard Berankis of Lithuania due to exhaustion. Berankis was leading 6-1, 6-0, 2-0.

Asked if Hewitt's match had anything to do with his fatigue, Nalbandian replied "a lot."

He returned to the tour last February after nine months off following hip surgery but withdrew from his first tournament back with a right leg injury. A left hamstring injury then sidelined him from the French Open.

The doubles team that proudly calls itself the "Indo-Pak Express" is giving new meaning to the idea that athletes can serve as ambassadors for their countries.

US Open doubles finalists Rohan Bopanna of India and Aisam-Ul-Haq Qureshi of Pakistan have written letters to their national leaders proposing they play a match for peace on a court spanning the Indian-Pakistan border -- a prospect that political analysts might consider unimaginable.

The neighboring countries have been through three wars since gaining independence from Britain in 1947 and spent almost all the time between in a state of heightened military tension.

"The letters have gone to both the prime minister and presidents of both countries," said Qureshi, adding the letters were sent last year. "We're still waiting."

The idea is that Bopanna would play on the Pakistani side of the border and his Pakistani teammate would be on the Indian side.

"It is a political issue in the end because there are a lot of security concerns," Aisam said.

Bopanna added: "I think right now they have more priorities."

The No. 10-seeded doubles team has been playing together on-and-off since 2003. They gained attention at Wimbledon last year where they started wearing sweatshirts with the slogan "Stop War, Start Tennis" as part of a campaign backed by a Monaco-based group called Peace and Sport.

Requests for the sweatshirts started pouring in, giving the players the idea to manufacture and sell them online, said Bopanna. Momentum continued at the U.S. Open where the United Nations ambassadors from their long-at-odds countries sat together in the stands to watch their matches -- a development that Aisam called "a huge thing."

The pair says they are optimistic that the proposed peace match will be allowed.