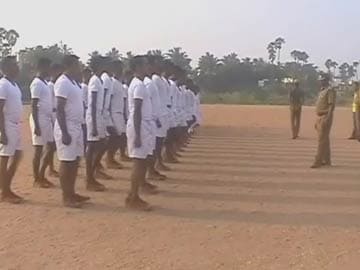 Madurai: M Shakti and K Shanmuganathan are toiling hard at a ground in Tamil Nadu. The duo is among six transgenders who are being trained by the police to be a part of the Tamil Nadu Home Guards.

"Here all of them treat us well. They don't look at as transgenders. Earlier I never used to go home as they did not let me in. Now they accept me and I'd be with my parents hereafter," says 26-year-old Shakti, who is a graduate.

They will be paid Rs 150 a day and would help the police in traffic regulation, crime prevention and in bandobust.

"Earlier I used to wear sari and be in a shop in Bengaluru. I didn't like it. Now we have a job and we are happy," says Shanmuganathan.

The initiative was taken up after a group of transgenders approached V Balakrishnan, the then Superintendent of Police in Madurai. Soon with due approvals their fitness and educational qualification were verified and those who qualified got appointed as Home Guards.

"This is to empower them socially and economically so they can also become a part of the society which is lacking now," Mr Balakrishnan said.

Tamil Nadu has already taken a lead in taking pro-active steps for the welfare of the third gender. They have been issued ration cards. Even colleges and universities have opened their gates for them. The state also has the country's first transgender television anchor, Rose.

In the past, the police have allegedly targeted the community for flesh trade and extortion. In a refreshing change, the community is now assisting them to check crime.
Comments
transgenders