They Photographed Family Taking Man To Hospital On Cart. No One Helped

Subramani, who was from Tamil Nadu's Villupuram district, was visiting his sister-in-law in Puducherry's Suthukeni. He was suffering from tuberculosis and his health deteriorated on Wednesday, his wife told police. 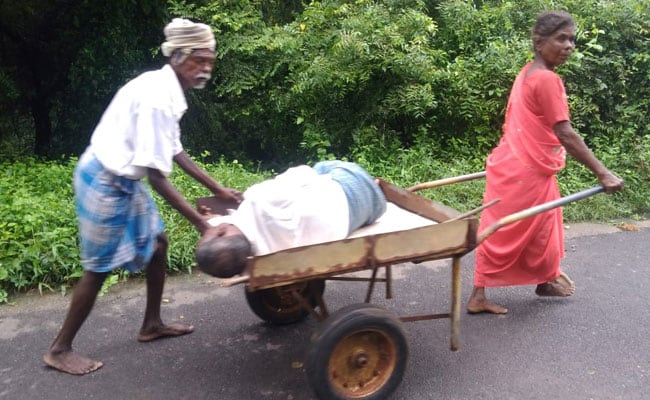 Family members carry Subramani on a cart to hospital.

A 65-year-old tribal man died in a village in Puducherry on Wednesday after he collapsed at his sister-in-law's home and his family tried to take him to a hospital on a cart. Instead of calling an ambulance or offering help, onlookers were seen clicking pictures as his family members pulled the wheel barrow.

Subramani, who was from Tamil Nadu's Villupuram district, was visiting his sister-in-law in  Puducherry's Suthukeni. He was suffering from tuberculosis and his health deteriorated on Wednesday, his wife told police.

As he collapsed, his wife, her sister and brother-in-law could only find a cart to take him to a hospital. Police said the family members did not have a mobile phone and were not aware that they could call an ambulance.

As the family reached the hospital, about four km away, the hospital declared Subramani "brought dead". The family was told by the hospital staff that it would be unable to facilitate transfer of the man's body to his home in Tamil Nadu, about 25 km away, because the hospital vehicles do not have the permission to cross the Puducherry border.

Left with no choice, the family had to carry the body on the cart again as they headed towards their village.

It was then that J Muruganandan, a police officer, saw them and arranged for an NGO-run ambulance.

Speaking to NDTV, J Muruganandan said, "Doctors declared him brought dead. His wife says he was a TB patient. They are daily wage labourers belonging to the Irula Tribe. They don't even have a mobile phone."

"If only those who were recording the family carrying the man on a wheel barrow had dialed for an ambulance, the man perhaps could have been saved. No help was offered to them," he added.