Welcoming him to the party, Tamil Nadu unit BJP president K Annamalai said Arjunamurthy, who was with the party before, has joined the outfit again. 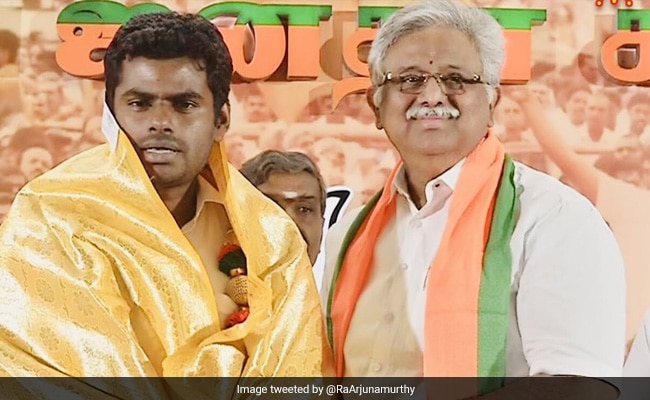 Ra Arjunamurthy described his joining the party again as a good day.

Ra Arjunamurthy, who had associated with Superstar Rajinikanth when the top actor had the idea to launch a political party that was abandoned later, on Monday rejoined the BJP.

Welcoming him to the party, Tamil Nadu unit BJP president K Annamalai said Mr Arjunamurthy, who was with the party before, has joined the outfit again. The party accepts him happily, the BJP leader said adding Mr Arjunamurthy is committed to work for people's welfare.

Speaking to reporters at party headquarters 'Kamalalayam', Mr Annamalai said the public hearings in Tamil Nadu on the proposed electricity tariff hike is just 'drama' and demanded that the DMK regime give up the proposal to increase power tariffs.

On the ongoing debate over freebies vis-a-vis a plea in this connection in the Supreme Court, Mr Annamalai said a wide range of amenities and services provided by the government like education, sanitation, drinking water and initiatives like providing houses to beneficiaries would not fall under the ambit of freebies.

Mr Arjunamurthy tweeted that he joined the BJP in the presence of Mr Annamalai and described his joining the party again as a good day.