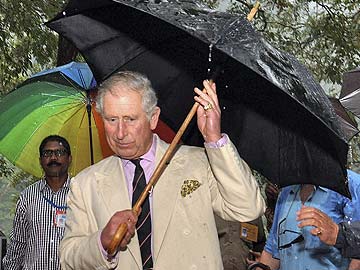 Britain's Prince Charles during a visit to the Vazhachal waterfalls, a popular picnic spot, 60 kms from Thrissur district in Kerala on Tuesday.

Thiruvananthapuram: Britain's Prince Charles, a strong votary of environmental preservation, visited Western Ghats and showed a keen interest in ongoing efforts to preserve the flora and fauna there.

Prince Charles visited the Vazhachal Forest Division in Kerala yesterday and spent time with Forest Department officials and conservation organisations including WWF-India to understand issues and challenges related to conservation in the Western Ghats.

He also interacted with the Kadar tribal community members in Vazhachal with whom WWF-India has been working with over the last three years.

WWF-India is working with Kadar tribals to increase their capacity for ecological monitoring and to support them in setting up effective mechanisms for conserving and managing their community forest resource use areas.

WWF-India officials maintained that while the visit and interactions will boost the conservation efforts, it also showed Prince Charles' support for the cause.

"This visit to an area that not many people know about will be a tremendous boost to the conservation of the ecologically fragile and threatened Western Ghats," said Sejal Worah, WWF India's Programme Director.

During the visit, Prince Charles was also told about the challenges in managing human-elephant conflict. He was shown a short video of an elephant collaring operation and given a demonstration of elephant movement tracking via satellite telemetry being undertaken in Kerala.

In Kerala, WWF has helped the forest department to radio-collar two elephants from the Wayanad Wildlife Sanctuary that has been involved in crop raiding, WWF officials said.

Worah also shared the results of tiger monitoring and protection in the Western Ghats landscape and described how an area in it that was not known to have a significant tiger population has recently been declared a Tiger Reserve.

The Prince showed great interest in the outcomes and was particularly interested to learn how tigers could be differentiated on the basis of their stripe patterns, WWF-India official added.

Promoted
Listen to the latest songs, only on JioSaavn.com
Prince Charles has been a strong supporter of environmental causes and has been bringing to worldwide attention the alarming rise of illegal wildlife trade.

Prince Charles and his wife Camilla Parker Bowles are in India and visiting different places in the country.