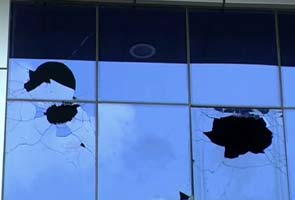 Chennai: Petrol bombs were hurled this afternoon at two cinemas in Tamil Nadu which were scheduled to screen Vishwaroopam, the controversial film starring Kamal Haasan. Nobody was hurt; glass windows were shattered at the theatres located in the Ramanathapuram district, 600 kms from the state capital of Chennai.

A two-week ban on the 95-crore movie ordered by the government was lifted last night by a judge of the Madras High Court who had watched the movie.  The government has appealed against his verdict and the High Court is scheduled to hear the case today.

Promoted
Listen to the latest songs, only on JioSaavn.com
At a press conference today, Kamal Haasan, who is 58, refuted allegations that in Vishwaroopam, Muslim characters play into negative stereotypes, the reason cited by the government for blocking the film.  The superstar threatened to move away from India, declaring that if it does not prove itself as a secular state, he will have to find a home outside the country.  However, he reassured his fans, "I will always remain a Tamil and an Indian" and said he would never stop writing or making Tamil films.