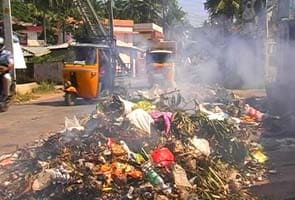 Thiruvananthapuram: Kerala has been battling a dengue epidemic. With 3,543 reported cases this year - 2,250 in Thiruvananthapuram alone - the state has seen highest number of dengue cases since 2005. And interestingly, most of the cases reported have been from the urban areas like Ernakulam and Kottayam.

The disease has claimed 13 lives this year.

In a tiny house in one of the labour colonies of Thiruvananthapuram, 75-year-old Sarasu amma can barely keep her eyes open. With other complications at this age, an unexpected attack of dengue has left her weak. The only relief for her as of now is that she is back at her home. In a house nearby is a 12-year-old girl, who recently returned from hospital after being treated for dengue. Her mother tells us that the doctor has asked her not to go to school for a month.

Mr Sam T Varghese, the General Overseer of Apostolic Churches Alliance, has witnessed four families close to him struggle through dengue this season. "Two people I know closely have survived dengue by the grace of God, but one has passed away. Another 33-year-old young woman has been put on ventilator and is fighting for her life," he said.

The state government has accelerated its anti-dengue measures, but there are allegations that the state response has been delayed. Speaking to NDTV, Director of Health Services Dr Jameela rubbished these ellegations and said that the government's efforts at countering the dengue epidemic have been going on for the last one year. "We are taking this issue very seriously. The efforts are on to reduce the source of the viral disease. We are observing dry days where people are encouraged to clean their fridge trays, pots and other places where clean water can get accumulated. The Aedes Aegypti mosquito that causes dengue breeds in clean water lying stagnant at a given place," said Dr Jameela.

Apart from the rain, Kerala has been plagued by the perpetual problem of Garbage disposal. Dr Lisie Thomas, Medical Superintendent of KIMS Hospital, said that Kerala has failed to check increase in mosquito numbers and the lack of appropriate waste disposal systems can be attributed as a facilitator to the recent dengue outbreak. Cities like Thiruvananthapuram and Ernakulam have been facing serious garbage disposal issues, especially after the capital's only waste treatment plant was closed down in December 2011.

Kerala has just finished battling an epidemic of water borne diseases and is already in the middle of the dengue epidemic. The health officials have warned that if the garbage disposal systems don't improve, the state would soon be facing a new kind of disease caused by rats.