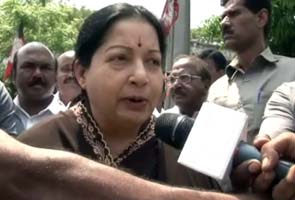 Chennai: Tamil Nadu Chief Minister J Jayalalithaa has opposed the revision of interest rate for the Rural Infrastructure Development Fund (RIDF), saying that the Reserve Bank of India's (RBI) move will force states to reduce investment in this area, which is vital for inclusive development.

"I understand that the RBI has revised the interest rate for RIDF loan to eight per cent per annum. Such a high rate will make RIDF loans unviable and the States will be forced to cut down on investment in rural infrastructure which is vital for inclusive development," she has said in a letter to Prime Minister Manmohan Singh.

Ms Jayalalithaa said that it was even more "shocking" that the higher interest rate was made applicable to the drawls after April 1, even for those projects which have already been sanctioned in the previous financial years.

"You will agree with me that once a project is sanctioned, it is not fair to alter the conditions during the project period. This unilateral action by the RBI has totally taken us by surprise and has upset the financial projections", the Chief Minister said.

Tamil Nadu would have an additional interest burden of Rs 229 crore on the projects already sanctioned and under implementation as a result of this move, she said.

Promoted
Listen to the latest songs, only on JioSaavn.com
Seeking Prime Minister's personal intervention, Ms Jayalalithaa demanded that the interest on RIDF loan should be restored to its original rate of 6.5 per cent.

If at all the interest rate has to be enhanced, she said, it should be kept around seven per cent and made applicable only to the loans for those projects which would be sanctioned from 2012-13 onwards.