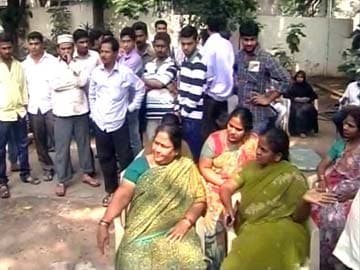 Hyderabad: "All I am asking for is my son's body," it was as though the poignant scene from Anupam Kher's iconic Saaransh was coming alive at Hyderabad's Forensic Science Lab. In the film, the character played by Mr Kher breaks down before an official who asks for a bribe in exchange for the ashes of his son's body. In Hyderabad, grieving relatives were vexed because they felt circumstances beyond their control were not letting them take away whatever remained of their dear ones, who are gone forever.

A father, a mother, a sister, a brother and an aunt - all were at Hyderabad's Forensic Science Laboratory (FSL) to give blood samples so it can be matched with tissues from the 41 bodies still lying unidentified in the city's Osmania Hospital. Only four bodies out of 45 people who died in the bus inferno on Wednesday morning have been identified so far.

Officials told NDTV, while usually it would take a fortnight, in an emergency, tissue-matching can be completed within a few days. But the biggest challenge for the forensic experts is to get tissue from the charred bodies to be able to do DNA profiling and matching. Their only hope is the bone marrow since bones may be the only tissue that survived the horrific fire.

Promoted
Listen to the latest songs, only on JioSaavn.com
That is why officials said identification may take upto 15 days but that only further upset the already grieving relatives. One family said they had identified the body of their loved one based on jeans on an unburnt portion of the leg, but they were not allowed to take it as another family has claimed the same body.

The FSL has now decided to work in three shifts and take help of private laboratories as well so the identification process can be completed in eight days. Till then, waiting is all that the relatives can do as they struggle to cope with the vacuum of their loved ones gone.