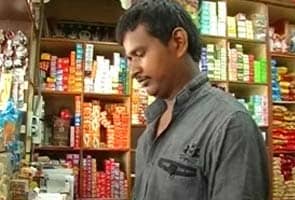 24-year-old Vikram has a degree in Information Technlogy.

Medak: A television set plays the debate on India's economy in Parliament as Vikram attends to customers at a provisions store in Shankarpalli mandal of Medak district in Andhra Pradesh. Scornful of the deliberation far away in India's capital, he sees no hope of things changing for the better.

Vikram has a reason. The 24-year-old has an engineering degree in Information Technology, and yet is forced to work in the shop after a desperate two-year-long search for a job.

With the economy in shambles, jobs are hard to come by in Andhra Pradesh. Just 15-20 per cent of the aspirants are landing up jobs in a state with the highest number of engineering colleges in the country.

For the remaining engineers, job means working as salesmen selling grocery and electronic goods, or working as government clerks or nursery school teachers; anything that comes by as long as you can earn a living.

"Out of 130 students in our college, just 20 got into IT; that too call centre technical support. They're working for 6000-7000 rupees," says Vikram's former classmate Srinivas.

Promoted
Listen to the latest songs, only on JioSaavn.com
Srinivas, relieved at being selected for a government job as stores in-charge, gives a revealing example, "The Medak ordnance factory got more than 80,000 applications - mostly from engineers - for 90 labour posts it advertised recently. The qualification was tenth pass."

"What a mismatch. Can these people sweep and clean machines?" he asks.