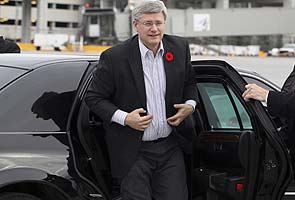 Bangalore: Canadian Prime Minister Stephen Harper arrived in Bangalore on Thursday on a two-day visit to the city.

The couple proceeded to the Raj Bhavan to meet Governor H R Bhardwaj.

Later on Thursday, he is scheduled to visit the famous Sree Someshwara temple in Ulsoor.