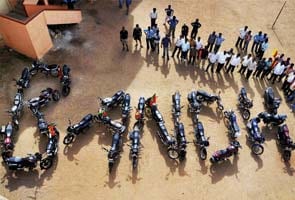 Bangalore: The bandh called by NDA and Left parties to protest the steep hike in petrol prices today disrupted normal life in parts of BJP-ruled Karnataka where bandh supporters set on fire three buses and stoned about a dozen others forcing authorities to withdraw bus services in the city.

According to initial reports received in Bangalore, the bandh evoked good response in several districts. Public transport was hit and shops and business establishments remained shut in several parts of the state.

Holiday has been declared for schools and colleges today in view of the bandh.

While a bus was set on fire on Roopena Agrahara, two others were torched in K.R. Puram and fire force rushed to the spot and extinguished the fire, police said.

In the wake of stray incidents of stone pelting, BMTC suspended city bus services till this evening.

As a precaution, Karnataka State Road Transport Corporation (KSRTC) also suspended services in some districts such as Kolar, Ramangara, Chikkaballapur, Hubli-Dharwad and Hassan.