An X-ray would later show the three-foot metal rod had impaled the the turtle so deeply, the spear spanned half its body. 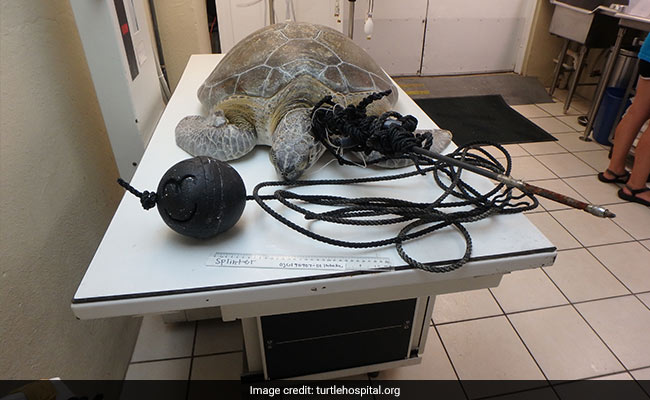 The turtle is currently in stable condition and resting at the clinic.

When a recreational boater found a sea turtle named Splinter off the coast of Key Largo, Florida, on Saturday, it was in a bad way. The turtle had a spear into its neck. On top of that, the 150-pound animal was tangled in a trap line attached to a buoy. An X-ray would later show the three-foot metal rod had impaled the turtle so deeply, the spear spanned half its body.

The turtle is OK now, after being rescued by the Florida Fish and Wildlife and rehabilitated by the Turtle Hospital in Marathon, Florida. But now that the weapon has been removed, the turtle's rescuers want to know who put it there in the first place.

"It's highly unlikely this was an accident," Turtle Hospital manager Bette Zirkelbach said in a statement, noting that the turtle's injury indicated the animal's underside was targeted.

According to the Turtle Hospital, Splinter is the second sea turtle found impaled this summer, and the first victim wasn't so lucky. In June, a dead turtle was found north of Key Largo in Biscayne National Park, with a spear in its head.

In addition to the spearing, others have perpetrated disturbing acts against sea turtles in Florida this summer. Last week, a woman came across several baby sea turtles who had been burned on a beach. In June a woman was arrested in Miami Beach after authorities caught her jabbing a nest with a wooden stake and stomping on the eggs with her bare feet. Miami police told CNN the eggs were not harmed.

All sea turtle species are protected by the federal Endangered Species Act and Florida's Marine Turtle Protection Act, and harming them could result in fines or jail time. The Turtle Hospital's chairman of the board, Richie Moretti, offered a $5000 reward for information that led to the arrest of whoever was responsible for spearing Splinter.

Splinter is still a subadult - a teen turtle, so to speak. A veterinarian first used an endoscope to asses the turtle's injuries before performing surgery to remove the metal rod. The turtle is currently in stable condition and resting at the clinic.

"Now it is just a matter of healing before she can be released," Zirkelbach said.