Betelgeuse could be in the midst of a 430-day pulsation period. 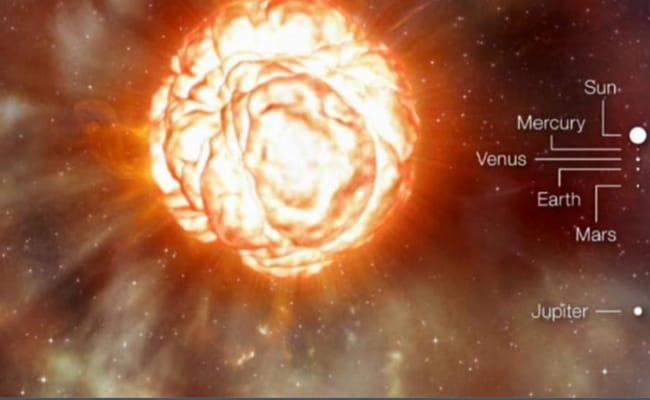 Betelgeuse may be entering a pre-supernova phase.

One of the brightest stars in the sky has been noticeably getting dimmer. Betelgeuse, a reddish star that is part of the Orion constellation, may be entering a pre-supernova phase - where it gets fainter before collapsing in a fiery explosion. A supernova is a powerful stellar explosion that occurs when a star 'dies'.

According to a report in Slate, over the last few months, Betelgeuse has gone from being the 12th brightest star in the sky to about the 20th. Located 642.5 light-years from Earth, this star, if it explodes, could be the closest supernova observed by humans.

CNET reports that according to data collected by Edward Guinan, a veteran Villanova University astronomer, Betelgeuse could be in the midst of a 430-day pulsation period. If that is true, it should reach its dimmest point on February 21 - give or take a week.

However, Mr Guinan and his colleagues also note that the star appears to be dimmer than it should. "So something very unusual is going on," Mr Guinan said.

If Betelgeuse - which is a thousand times bigger than the sun - goes supernova, the explosion would be so bright it could be seen during the day. The chance of witnessing a supernova light show has generated a huge buzz online:

Down here on Earth, we're going to see a very bright light in the sky. It could even be visible during the day, and bright enough to rival a full moon at night. The event will be breathtaking to behold, but #Betelgeuse will be wrapping up its farewell tour. It's been a pleasure. pic.twitter.com/wffL9OMOzP

In the coming weeks, astronomers will be watching closely to see if Betelgeuse explodes.