Shlokas written by Shree Samarth Ramdas, a noted 17th-century saint and spiritual poet, were recited in chorus by around 21,000 students from 64 schools. 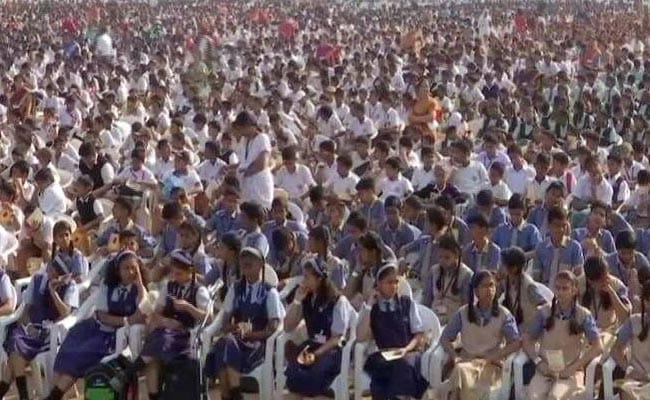 A college in Maharashtra attempted a Guinness World Record for the largest Sanskrit shloka recital session on Saturday. The event was organised by Sir Parshurambhau college in Pune.

Shlokas written by Shree Samarth Ramdas, a noted 17th-century saint and spiritual poet, were recited in chorus by around 21,000 students from 64 schools.

Earlier this year, a new world record for the tallest tower of cupcakes was set in Chennai. According to Guinness World Records, the record was attempted by Preethi Kitchen Appliances and Food Consulate Chennai. Made with 18,818 cupcakes, the massive tower measured 41 feet and 8 inches.

All the cupcakes used to create the tower were baked on site. The participants created the cake mixture, then baked, iced and decorated the cupcakes on site before placing them on the huge pyramid structure. The entire operation took a dedicated team of workers about 30 hours to complete, and the tower was assembled at the Forum Vijaya Mall.

After the tower was measured by a Guinness World Records Adjudicator, the cupcakes were distributed at NGOs across Chennai.