Cricket season is here, and our dear cricketers are readily padding up. Meanwhile, lets find out what they do in their free time. 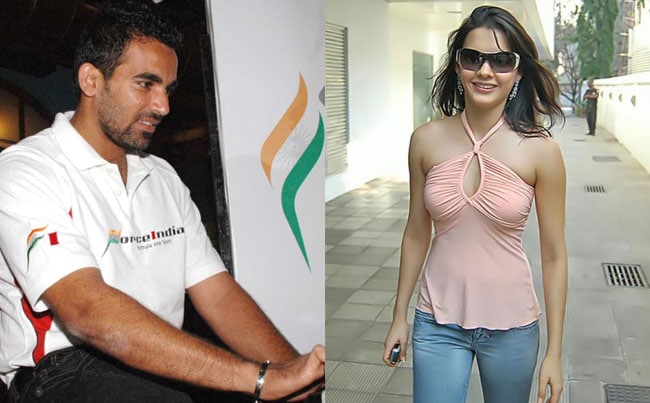 Isha Sharvani and Zaheer Khan are making headlines once again with rumours of an impending engagement any time now. A week ago, Isha Sharvani had denied living in with the ace cricketer.
So what's fueling this latest round of gossip about the couple? There's no smoke without fire, we say. Looks like the couple are heading for a long engagement though, since some sources say a marriage is not immediately on the cards. Keep watching this space for updates. 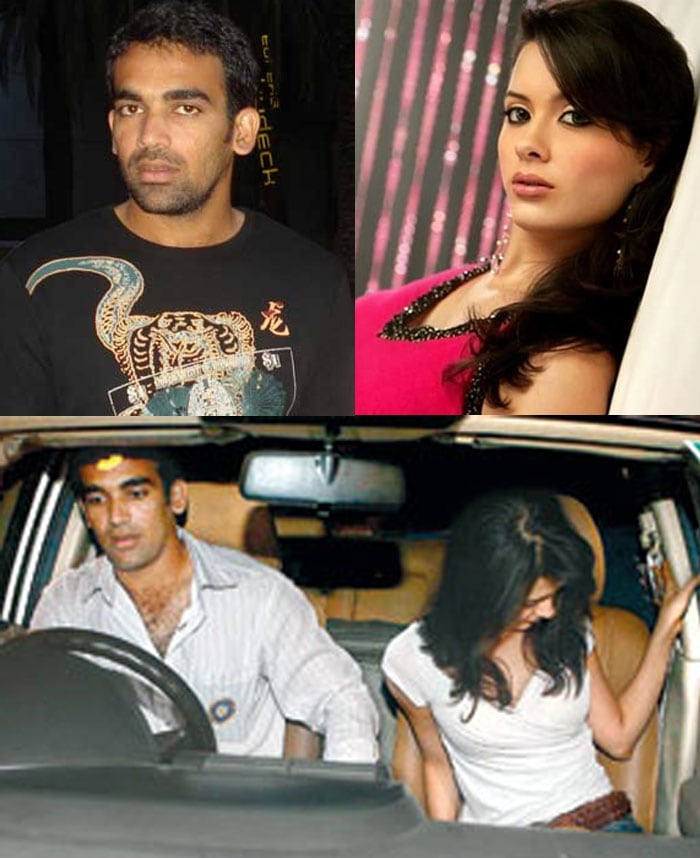 According to reports, Zaheer and Isha first met at a function in 2005, where Isha had performed for the then-touring Australian team.
After playing catch up and then dating for two years, the couple called it quits in 2007.
However, last year Zaheer and Isha decided to give their relationship another shot. If the buzz is true, this time it's for keeps!
Ahead, more pictures of wives and girlfriends of cricketers. Listen up ladies! Yet another bachelor boy from the world of cricket may soon be 'taken'! We hear that Virat Kohli and Sarah-Jane Dias are quite an item.
If the latest rumour is to be believed, the two met at a party a few months ago. We hear Virat and Game's leading lady have been going out for cosy dinners together and catch up when their busy schedules permit.
Keep an eye out during the IPL matches, perhaps Sarah will confirm it by just showing up! 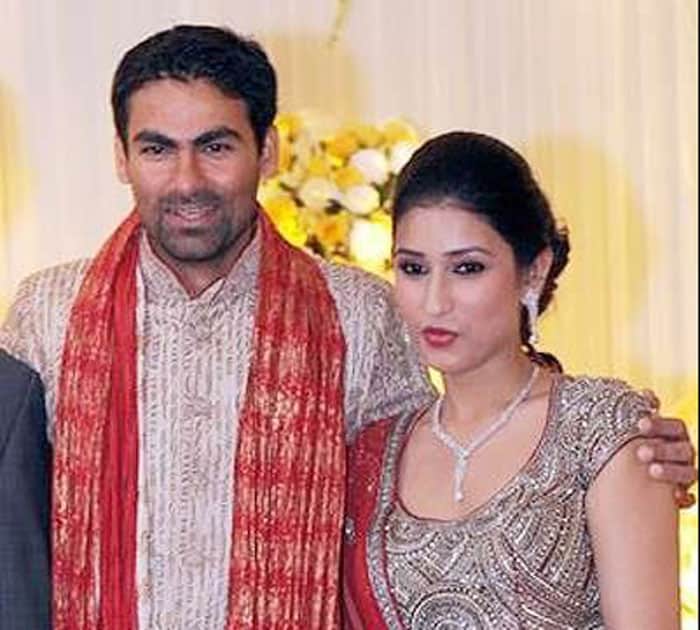 Mohammad Kaif married his long time girlfriend and journalist Manu on March 25th in Noida in what can only be called a top-secret wedding. 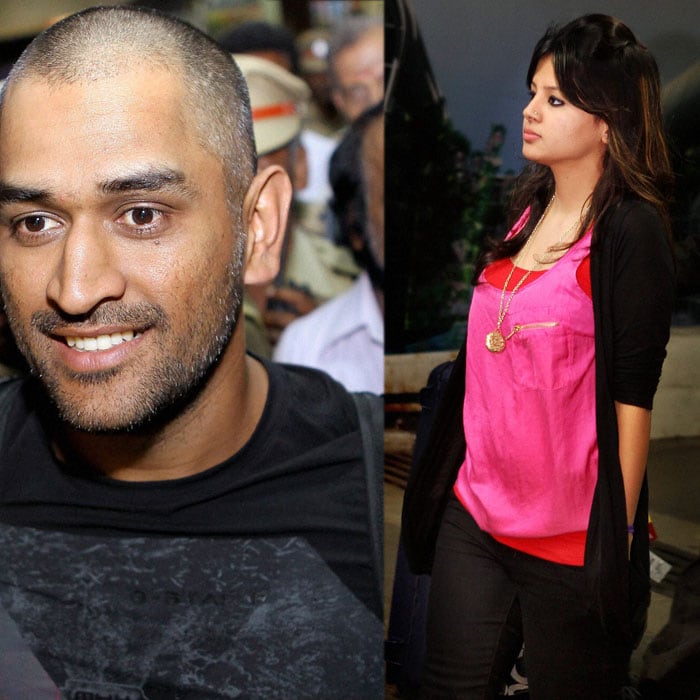 India skipper Mahendra Singh Dhoni was spotted with wife Sakshi at the Chennai airport as Captain Cool arrived for the first match of Indian Premier League (IPL) in April 2011. 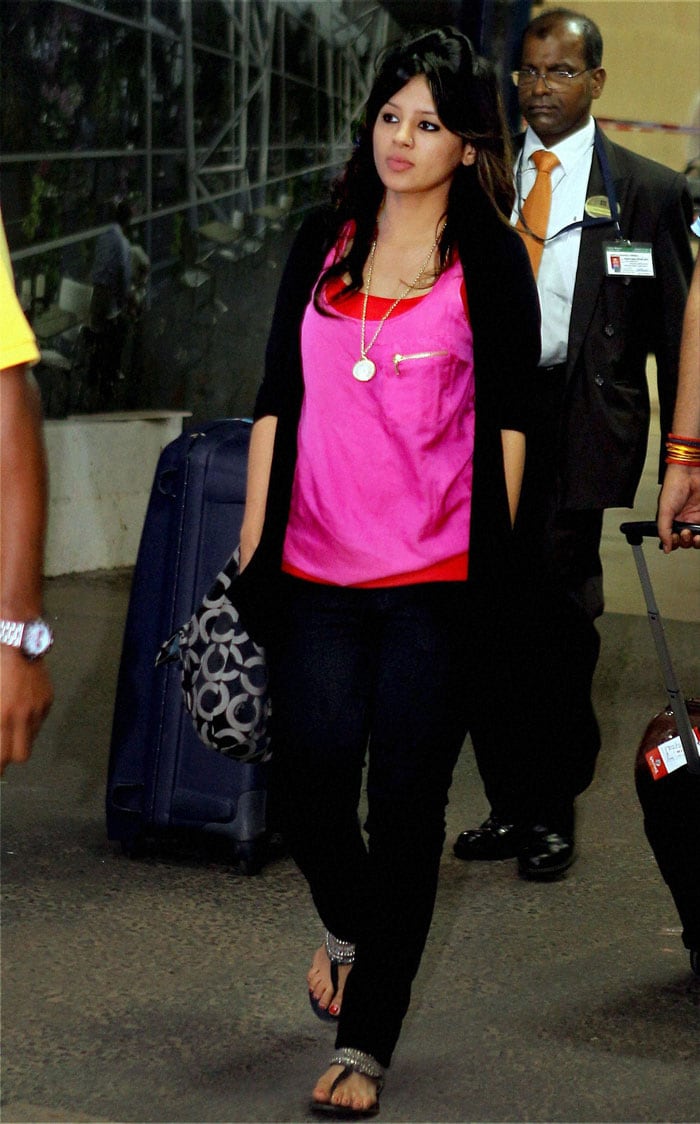 Sakshi Dhoni at the airport. 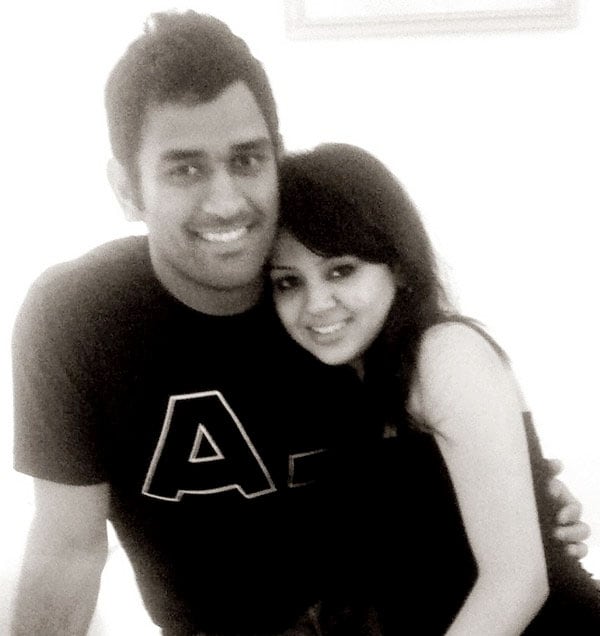 M S Dhoni was clean bowled by Kolkata girl Sakshi three years ago and broke a million female hearts when he took himself off the marriage market last year. 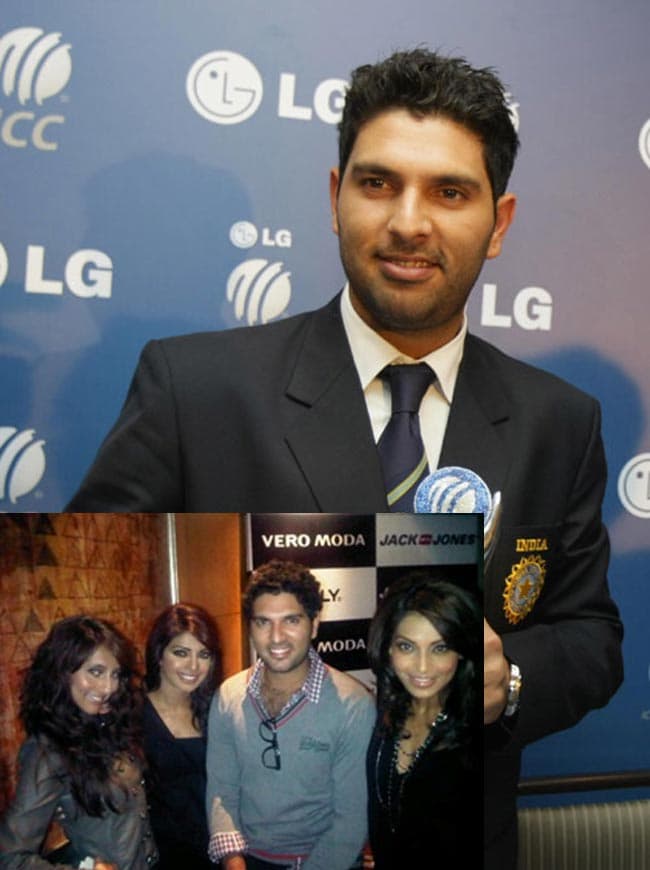 Yuvraj Singh, all proud chested as Man of the Series of the 2011 World Cup, had his ex-flame Anusha Dandekar cheering for him during matches at the stadium.

Have they sorted out their differences? 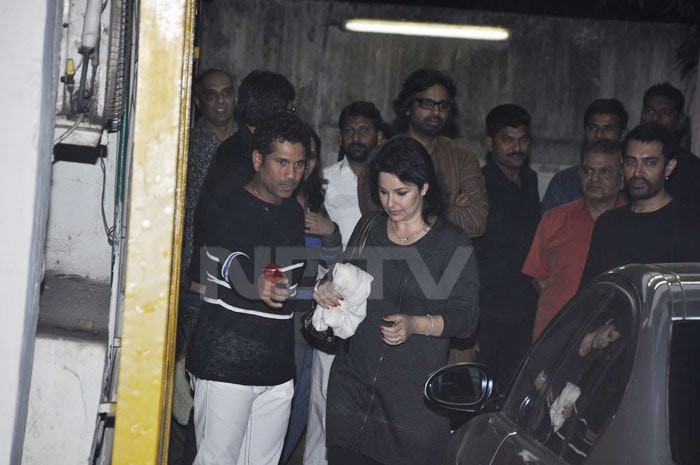 It's been 16 years not out for Mr and Mrs Tendulkar and Anjali is still too nervous to watch her husband bat from the stands. Instead, she stays home and watches him on TV! 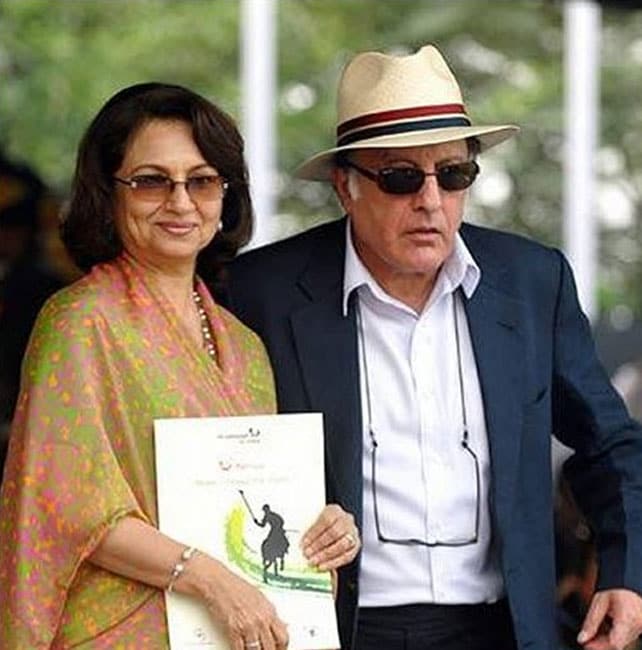 The love affair between Tiger Pataudi and actress Sharmila Tagore was the stuff that Bollywood dreams are made of.
Over 40 years and three good looking children later, the Pataudis are our definition of happily ever after. 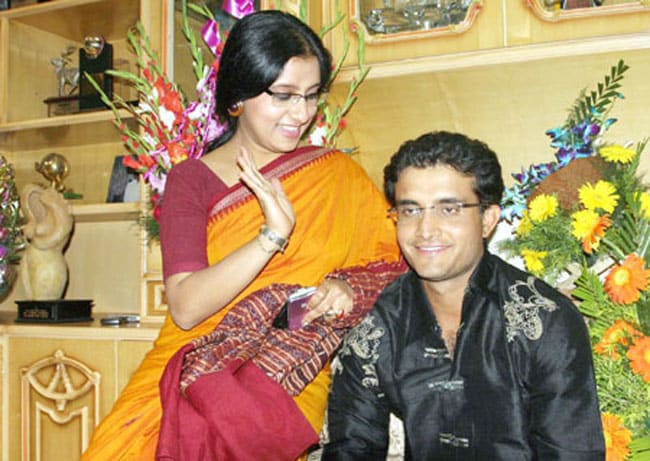 Sourav Ganguly fell for girl-next-door Dona and married her despite heavy opposition from family on both sides. The marriage survived the perils of captaincy and a small hiccup in the shape of South Indian actress Nagma. 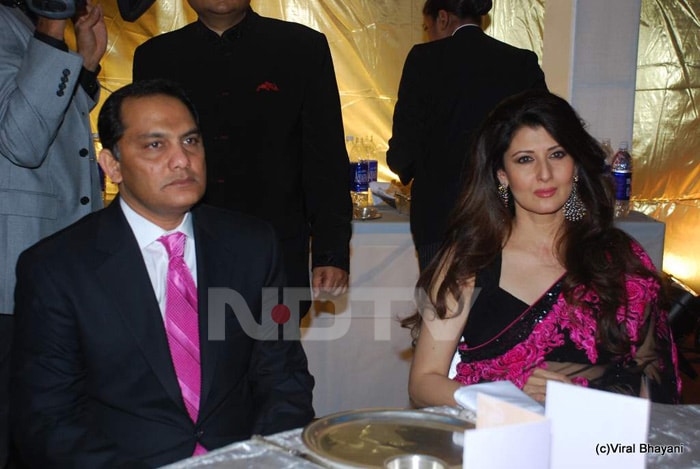 Sangeeta Bijlani went from girlfriend to wife of the already married Mh Azharuddin and it recently looked like she'd be going the way his first wife did, courtesy a certain badminton player. But all seems to be well between them now. Vinod Kambli made up for an average innings on field by scoring a hottie wife in former model Andrea. 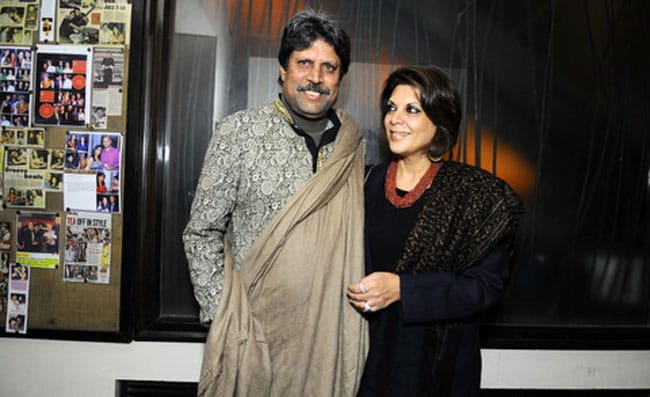 Kapil Dev led India to World Cup glory in 1983 but at home, the captaincy belongs to wife Romi. 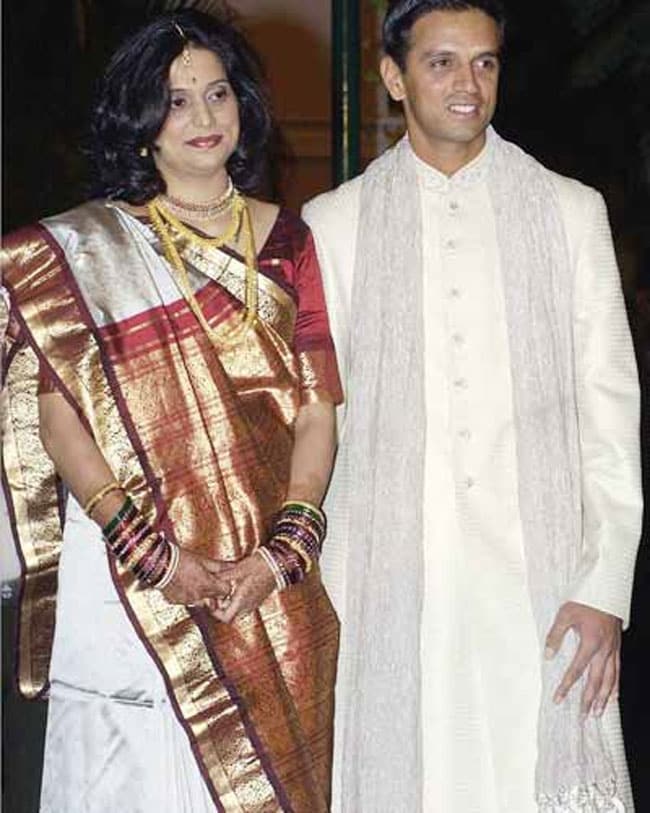 Rahul Dravid and Vijeta had a traditional arranged marriage and it's worked out well for The Wall – no fear of cracks, there's a doctor in the house! 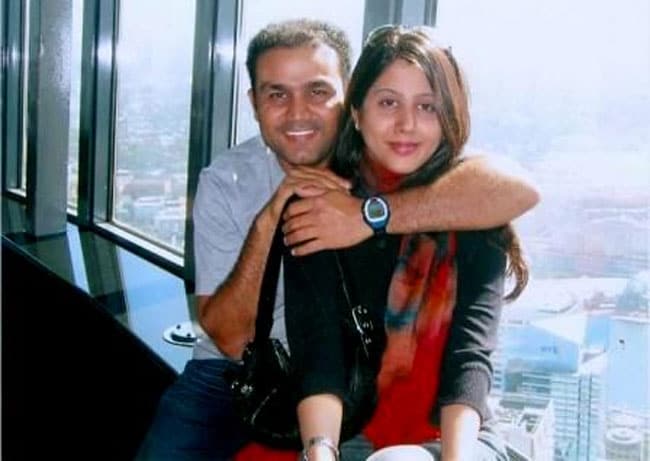 Virender Sehwag had to do some heavy running between wickets to get wife Aarti to say I Do after 17 years of being “just friends”. Persistence was the name of Sehwag's game in this case. 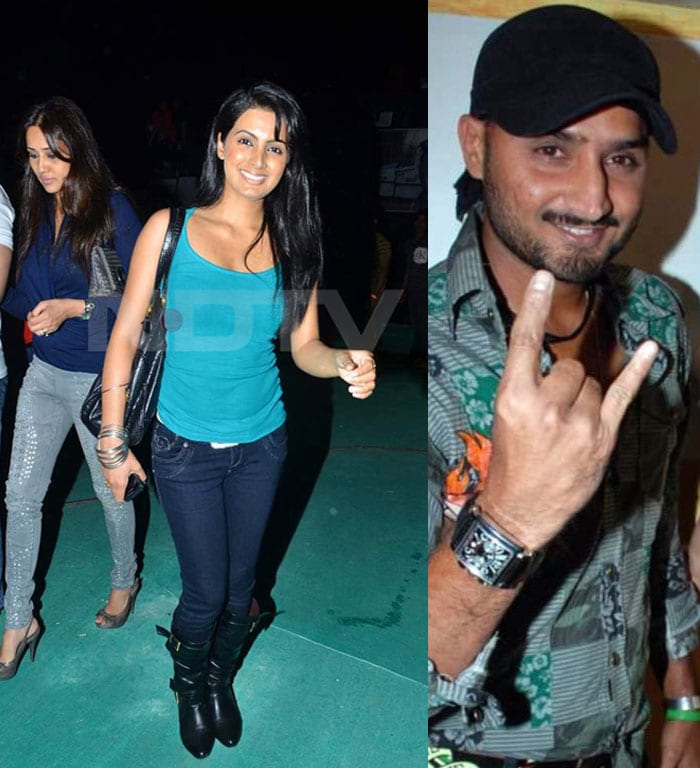 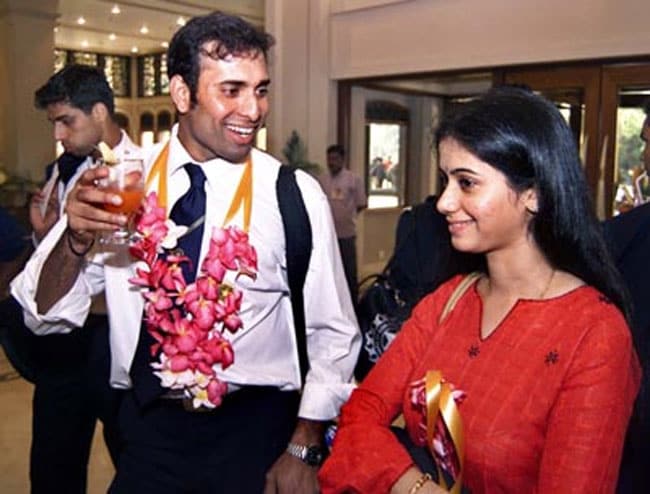 Cricket had a romantic moment on the pitch as V V S Laxman dedicated a century against South Africa to his wife, Sailaja, calling her a pillar of strength. 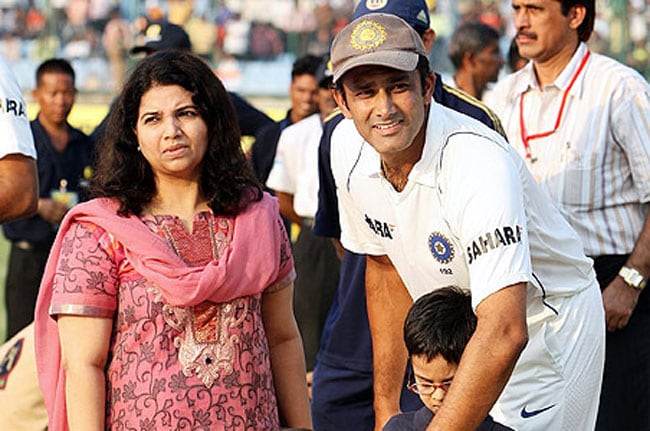 Anil Kumble married single mum Chetana and the couple have been batting on a steady wicket ever since, adding two junior editions to their existing brood of one. 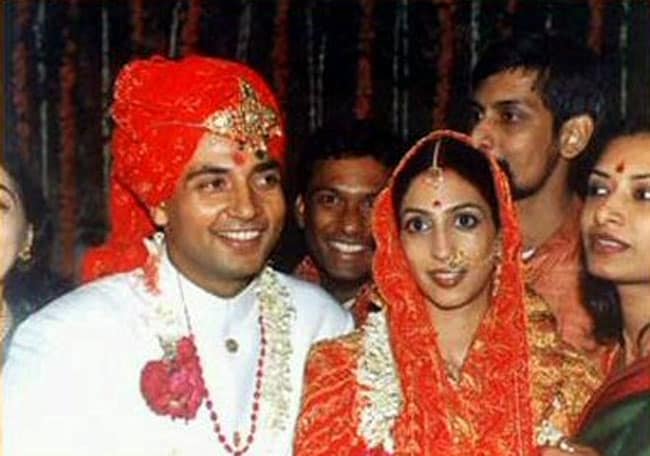 Ajay Jadeja's batting days are behind him but he's the number one hitter at home with wife Aditi and the junior Jadejas. 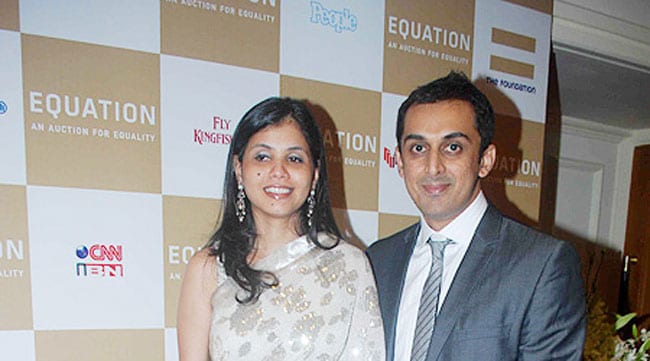 Rohan Gavaskar didn't do much to follow in his dad's hallowed footsteps but he certainly bowled a maiden over in wife Swati. 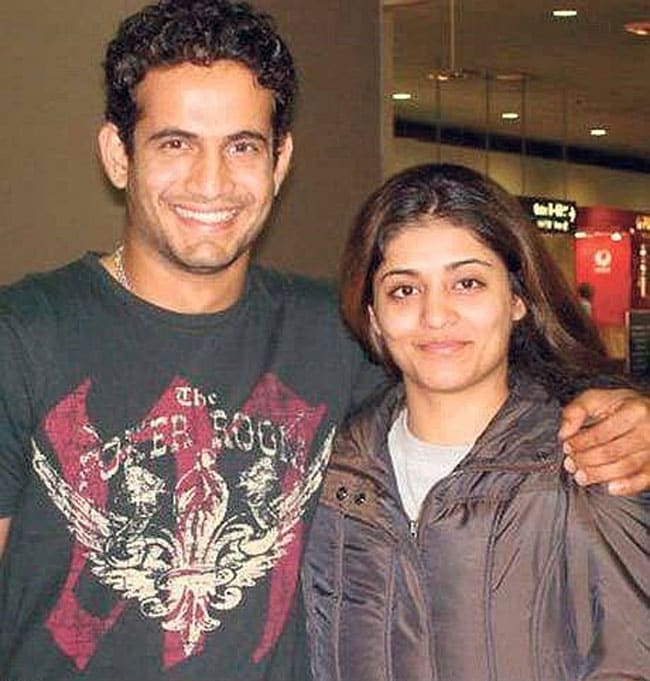 Baroda Bomber Irrfan Pathan and long-time girlfriend Shivangi decided to put a ring on it after 6 years of courting. A wedding is on its way…anytime now. 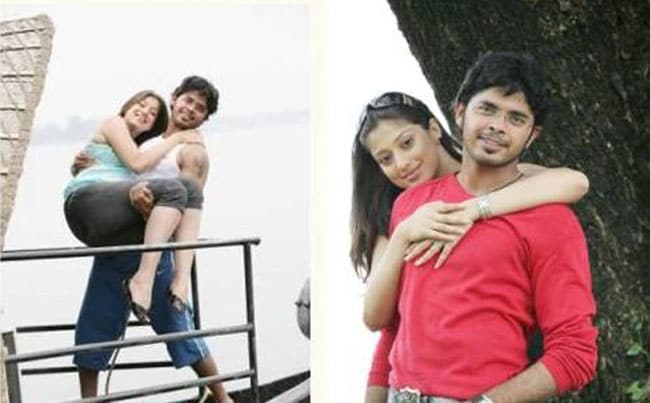 Slapgate Sreesanth fell for Tamil actress Lakshmi Rai, rumoured to have also been the object of Dhoni's affections. Their romance was brief and mostly lived out in front of the cameras. 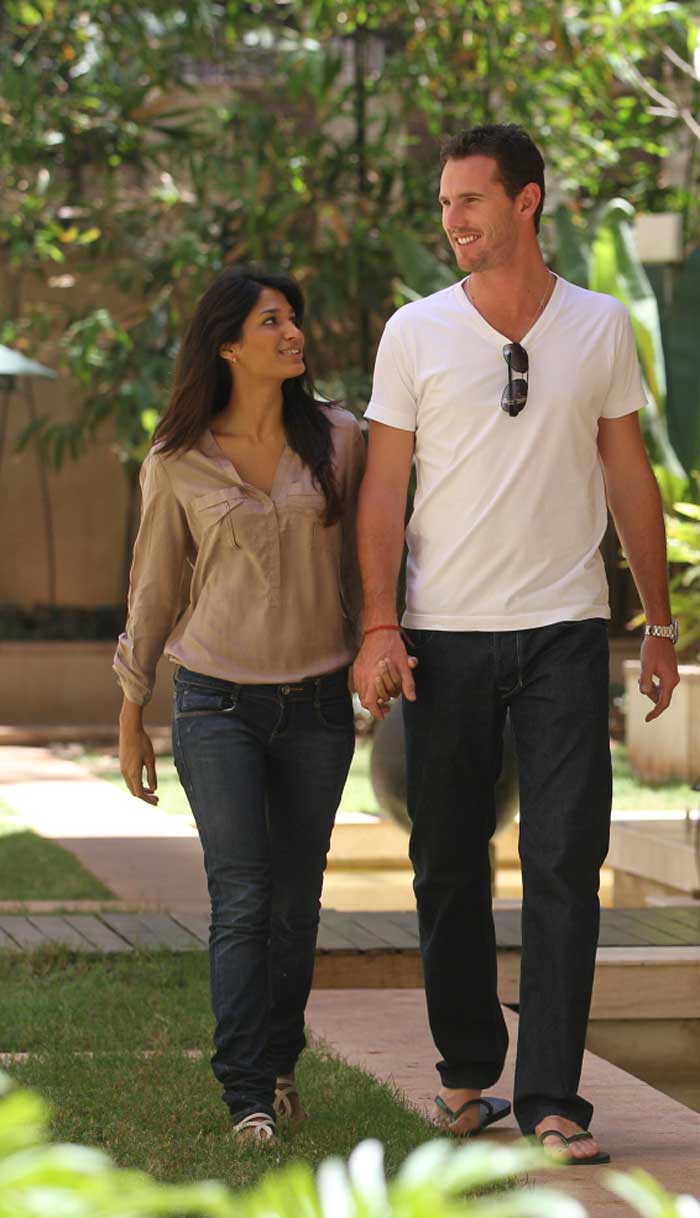 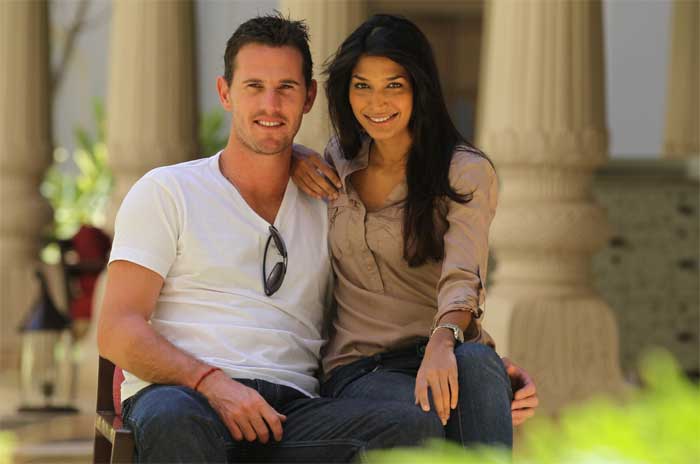 Tait who plays for the Rajasthan Royals, met Mashoom in 2010 during IPL 4, and now the pacer plans to spend a few months in India to be with her. (Photo: Getty)