Who is Narayan Dutt Tiwari? 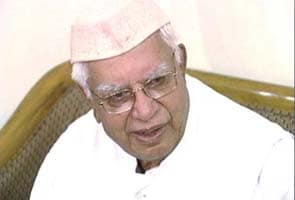 Anyone who began reading the news in the last 15 odd years, would know Mr Tiwari more for scandals - a sex scandal cost him his job as Andhra Pradesh Governor in 2009. A year before that, he had already been sued by a young man, Rohit Shekhar, who claimed that Mr Tiwari was his biological father. Mr Tiwari said he was not.

Mr Shekhar fought a pitched legal battle that resulted in a court-ordered DNA test showing today that Mr Shekhar is indeed the son of the veteran Congressman. Mr Tiwari is 87; Rohit Shekhar is 32. His mother Ujjwala Sharma, is the daughter of a former Haryana minister, Sher Singh.

Mr Tiwari tested reluctantly. Before the result of the DNA test was known, he pleaded that it be kept confidential. After it was known he sent a small message from Dehradun, where he lives, requesting that he be allowed to live his personal life as he thought fit. Mr Shekhar has vowed that Mr Tiwari's travails have only just begun.

There have been other stories about Mr Tiwari; insinuations, assertions, allegations. Internet jokes have abounded.

Old-timers say the salacious tales have overwhelmed those of his administrative prowess and political tenacity. Mr Tiwari was Chief Minister of undivided Uttar Pradesh thrice and of Uttaranchal once. He is credited with much development work in the big and crucial state of UP. He has also been an MP both in the Lok Sabha and the Rajya Sabha  and has held several important portfolios as a minister at the Centre. Mr Tiwari also served as Deputy Chairman of the Planning Commission.

He reportedly fancied his chances of becoming Prime Minister in the vacuum created by the assassination of Rajiv Gandhi in 1991. Those were put paid to by a shock defeat in the 1991 Lok Sabha elections - he lost to the BJP candidate in his home ground, Nainital. Those were years of internal crises; many Congressmen felt rudderless in the absence of a Gandhi at the helm of affairs. ND Tiwari set up the All India Indira Congress (Tiwari) with top Congress leaders like Arjun Singh and K Natwar Singh by his side.

They returned to the Congress fold when Sonia Gandhi was coerced to take over the party as President in 1998. When the state of Uttaranchal was carved, ND Tiwari was the tallest leader and, despite grumbling in the party's state unit from younger men who thought they deserved more, he became CM. His rivals pleaded that he was too old. In 2006, Mr Tiwari offered to resign on the grounds of age. But carried on for some more months.

In 2007, he was appointed Governor of Andhra Pradesh and he quit in 2009 on "health grounds." The resignation came very close to a TV channel airing a sex CD that purportedly had Mr Tiwari on tape. Mr Tiwari said it was a political conspiracy.

Among the highpoints in ND Tiwari's long political career is his being credited with thinking up NOIDA or the New Okhla Industrial Development Authority. He was also the first President of  the Indian Youth Congress. He took that post in 1969 - he was 44.

Promoted
Listen to the latest songs, only on JioSaavn.com
Narayan Dutt Tiwari was born on 18 October, 1925 in a village in Nainital, now in Uttaranchal. His father fought in the freedom struggle and was jailed. In 1942, 17-year-old Narayan Dutt joined his father in the Nainital Jail - he was arrested for writing anti-British propaganda material. He later studied political science at the prestigious Allahabad University and also got a law degree from there. He was a topper in college and also served as the students union president.