Who is Baba Ramdev? 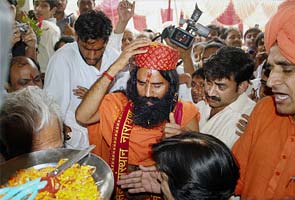 New Delhi: As Swamis go, he is rather young - turned 45 last year. Before Baba Ramdev became the latest crusader against corruption, he was best known for his efforts to popularise yoga among increasingly health conscious Indians.

Ramdev is largely a television and video phenomenon. He fired the imagination of an entire segment of TV watchers, who tuned out of daily soap opera to tune into and do yoga with Baba Ramdev. Now, thousands turn up at his camps to do mass yoga with him.

A wiry man with a full flowing black beard, hair parted and tied back, in red robes, the abiding vision of Ramdev is of a man demonstrating very difficult yoga asanas. He has a considerable following and people flock to his institutes in Haridwar, near Dehradun. The yoga guru claims to cure many ailments through yoga and ayurveda and has courted controversy with his claims of curing AIDS and cancer with yoga, though he later clarified that he had only said yoga helped provide relief to those with AIDS.

As his popularity has grown in the era of multiple television channels, Ramdev has found not just celebrity, but political ambition too. A year ago he announced that he would launch a new political party - the Bharat Swabhiman - to "cleanse the system." Ramdev said that he would not contest elections but that his party would contest all 543 Lok Sabha seats in the next elections on a manifesto that shall address black money and corruption as the key issues.

And those are the issues that Ramdev has brought out now. In a change of plans, he said he would launch a satyagraha instead of a party. He is do that today in the national capital. With a hunger-strike, much in the manner of social activist Anna Hazare, who had galvanized mass support with his hunger strike against corruption two months ago. Both Ramdev and Anna are part of a citizens effort to goad the government into making more stringent laws against corruption.

Ramdev  was born in 1965 in a Haryana village called Alipur. He was named Ramkishan Yadav. Various biographies say Ramkishan attended school till class 8 and then joined a gurukul where he learnt Sanskrit and Yoga.

He later became a sanyasi (one who renounces the world) and took the name Baba Ramdev  and began to teach yoga. He later moved to Haridwar, where he continued to offer free yoga lessons. His followers claim he has studied the Hindu scriptures deeply and even taught them in various gurukuls.

Promoted
Listen to the latest songs, only on JioSaavn.com
Ramdev has set up several trusts, gurukuls and foundations and conducts yoga camps and classes throughout the world. He is known for his focus on pranayama, the ancient breathing exercises that are a fundamental part of yoga.

Baba Ramdev muscled his way into India's consciousness in 1995 when his mass yoga sessions started being televised. He used his classes to preach against corruption in the system, and occasionally to promote a swadeshi ideology that was welcomed by saffron groups.
Comments
Baba RamdevAnna Hazareyoga guru Ramdev

Who is Sri Sathya Sai Baba?