The IPS officer retired prematurely last year and joined the AAP in June 2021, inducted into the party by its national convenor Arvind Kejriwal. Singh says he has joined politics "to cleanse the system". 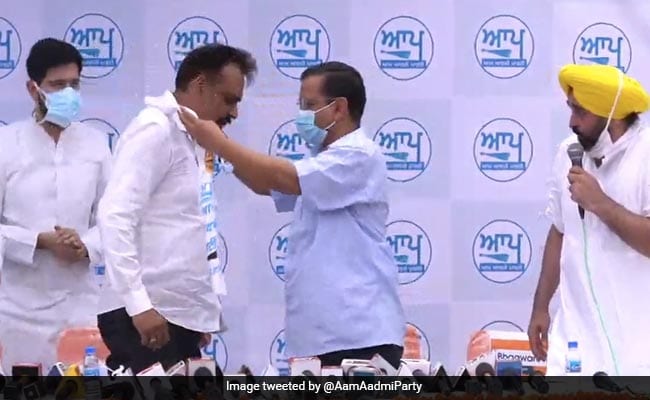 Kunwar Singh, 52, is a prominent face of the AAP in Majha region.

Kunwar Vijay Pratap Singh, a former IPS officer who took the political plunge last year to "cleanse the system", says he is just a candidate in the election, but it is actually the people of Amritsar who are fighting the polls for him.

The 52-year-old is the Aam Aadmi Party's candidate from Amritsar North constituency, where he faces sitting Congress MLA Sunil Dutti, former minister Anil Joshi, who switched over to the SAD from the BJP last year, among others.

Mr Singh is a prominent face of the AAP in Majha region where the party hopes to do well in the February 20 assembly elections.

The IPS officer retired prematurely last year and joined the AAP in June 2021, inducted into the party by its national convenor Arvind Kejriwal. Singh says he has joined politics "to cleanse the system".

Mr Singh was earlier part of the Special Investigation Team probing the 2015 police firing cases related to the anti-sacrilege protests at Kotkapura and Behbal Kalan in Faridkot.

He has also served as the Superintendent of Police (city) Amritsar in early 2000s, and later as the Senior SP here between 2007 and 2009.

Kunwar Singh has plans drawn up regarding what he intends to do for the people of Amritsar and Punjab if he and his party win the assembly election.

Improving law and order, eliminating the drug menace, ensuring women safety, health, education are some of his and his party's priority areas, he says.

"All departments will work in a people-oriented, community-oriented way and there will be zero tolerance towards corruption and we will give a clean administration," he says.

Asked why he chose to contest from Amritsar, he says, "My decision to enter politics was guided by people of Amritsar. It was people who wanted me to contest from here and they prepared me for this mission. Entire Amritsar is fighting my election. People said they want an upright and honest people to come forward." "And Amritsar, for me, is like a family," he says.

He says the AAP will eradicate the 'mafia raj' from Punjab and the party has already drawn up a plan to eradicate the drug menace, which he said has ruined the future of the thousands of youth.

Listing other priority areas, Singh says the holy city Amritsar will be made clean and green and a crime-free city. Special focus will be on women's safety and prevention of crime against women.

"When I was SSP Amritsar, common people and police jointly made what is still famous as Amritsar Model of Policing, which was later adopted in Ludhiana and Jalandhar as well when I became Commissioner of Police there," he says.

He said due to "nexus" between the mafia and some politicians, drug menace continues to prevail.

“But we will break this nexus and those spreading drug menace will be put behind bars,” he asserts, while adding that those youth who have fallen prey to the habit will be treated and rehabilitated.

The former police officer feels political interference has increased in the day-to-day working of the police force.

"We promise that police will no longer work as per diktats of politicians. We will free police from any political pressure. People-oriented and community-oriented policing will be seen in Punjab, especially in Amritsar," he says.

"When I was in police service, I was in double role -- on one hand I was very strict against criminal elements and on the other hand I had all love and respect for common people and tried to facilitate them in every way and they reciprocated with their love and blessings," he said.

Singh said, “We have launched Punjab Bachao Mission and we are calling for total political transformation, a revolution, a change and we are getting big support from the general public".

Spelling out his and his party's other priorities if voted to power, Mr Singh said education will be made job-oriented and new avenues of employment will be created for the youth.

Claiming that issues like environment may not be a priority for other parties, Kunwar Singh says the AAP will issue a "green manifesto for Amritsar and environment protection figures prominently in our agenda".

He also said that AAP leader Kejriwal delivers what he promises as he has done in Delhi.

"We give guarantee and Kejriwal ji has given these in power, health and other areas and we have said we will give Rs 1,000 to women each month," he said.

Odds Stacked Against Him, Akhilesh Yadav Heads Into His Biggest Fight