During her lifetime, Kapila Vatsyayan authored over 200 research papers, besides writing 20 books. 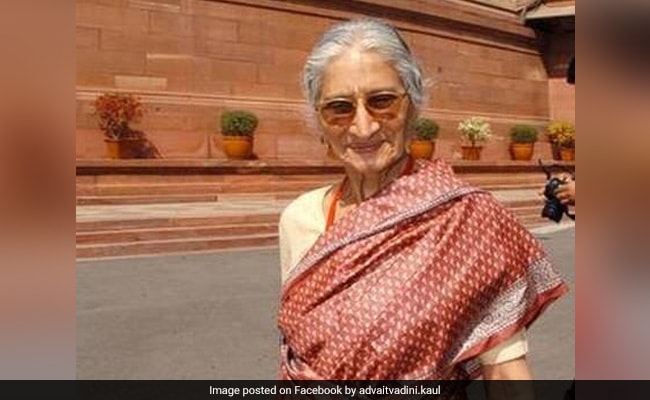 Kapila Vatsyayan went on to teach at the universities of Delhi, Banaras, Philadelphia and California.

With an insurmountable amount of research in the fields of arts, culture and civilisation to her credit, Kapila Vatsyayan epitomised being a "scholar" like no one else.

A Padma Vibhushan awardee, she spent her long career of nearly six decades deep diving into histories of different art forms - dance, art, architecture and more, while tracking and analysing their origins and evolution.

After she passed away on Wednesday at the age of 92, it was her scholarly disposition and her consistent efforts of promoting the arts that were remembered fondly by friends, colleagues, and fans alike.

"Through her work, scholarship and creative imagination, Kapila ji became a powerful voice of Indian civilisation. She emphasised the rich plurality, openness and inclusiveness of the Indian mind and aesthetics," Mr Vajpeyi, who had known Vatsyayan since the early 60s, told PTI.

During her lifetime, she authored over 200 research papers, besides writing 20 books.

Some of her notable works include The Square and the Circle of Indian Arts (1997), Bharata: The Natya Sastra (2006), Dance in Indian Painting (2004), and Classical Indian Dance in Literature and the Arts (2007), Transmissions and Transformations: Learning Through the Arts in Asia (2011).

Born in New Delhi on December 25, 1928, to Ram Lal Malik and Satyawati Malik, Vatsyayan was the younger sister of well known poet and critic Keshav Malik.

She married legendary Hindi poet Sachchidananda Vatsyayan "Agyeya'' in 1956, whose last name she evidently continued to use even after their separation in 1969.

Her ornate educational record features two masters degrees, one in English Literature from Delhi University and one in Education from the University of Michigan in the US, followed by a Phd from the Banaras Hindu University.

She went on to teach at the universities of Delhi, Banaras, Philadelphia and California.

In addition to a stellar academic record, Ms Vatsyayan was also trained in Kathak under Acchan Maharaj, in Manipuri under Guru Amobi Singh, as also in the Kalakshetra school of Bharatanatyam and in Odissi.

Her commitment to the arts led to her becoming the founder trustee of the Indira Gandhi National Centre for the Arts (1987), of which she was also the academic director from 1993 to 2000.

During her time there, recalled photography artist Parthiv Shah who first knew her through his parents and then as an artist, that she was a "task master".

"She had the kind of demeanour that would make all government officials working with her respect her and take her seriously, especially at a time when most men were averse to the idea of having women bosses," Mr Shah told PTI.

He added that her expertise and knowledge in the field of arts was unparalleled.

"She managed to develop a rapport with scholars across the world because of her immense knowledge. She knew so much about the arts that she could spontaneously have conversations with ambassadors and cultural representatives of other countries," Mr Shah said.

It was because of her, Mr Vajpeyi said, that his first international visit ever became possible.

"My first visit abroad became possible when I was a deputy secretary of education in the Madhya Pradesh government. I had never been abroad before. She sent me as a writer to five countries," he said.

Besides IGNCA, Vatsyayan was also associated with the establishment and development of many libraries, museums and archival repositories, among which was the India International Centre, of which she was a "life trustee".

At the time of her passing away, she was Chairperson of the Centre's International Research Division.

Former IIC secretary, NH Ramachandran, who worked closely with Vatsyayan for nearly two decades said that while she was most popularly known as an art historian, she was also "a great educationist, and administrator".

"It was a pleasure working with her. She had tremendous capacity to work, was extremely educated, and also had a sense of humour," he said.

Vatsyayan was also the Secretary, Department of Arts, in the Ministry of Education, Government of India, where she served the role of an advisor, administrator and policy maker in the field of culture, especially its interface with education.

"For five decades she was actively involved in international cultural relations, both bilateral and multilateral. On behalf of Government of India, she negotiated nearly fifty cultural agreements with other countries," according to a profile of Vatsyayan by IIC.

Her passion for the arts continued till the very end, notwithstanding her old age as well as failing eyesight, said Mr Shah.

He said he met her at the opening of one of his shows in IIC a couple of years back.

"I had curated a show where photographers had clicked pictures of different Indian crafts, and one of them was a picture of a tanpura. I remember her taking great interest in that, especially because she was interested in music, dance and culture," he said.

Mr Vajpeyi too said that she would try and attend all his sessions and talks at the IIC, and if she couldn't make it, she would definitely "listen to the recordings".