My secular friends are going to be angry - or at least upset - with me. My submission is that "Hanuman Bhakt Kejriwal" is the best antidote to the polarising politics of Modi and Amit Shah. It works brilliantly as a counter-strategy to the BJP's politics of Hindutva. Kejriwal in a media conclave recited the Hanuman Chalisa (Hindu devotional hymn addressed to Lord Hanuman) and then tweeted the video, stating that listening to the Chalisa is good and soothing. This should infuriate old-style secular pundits. He will immediately be dubbed as "indulging in communal politics or pursuing soft Hindutva." Many may dig out old claims that the Kejriwal-led Anna Movement was manufactured in the RSS factory to discredit the Manmohan Singh government. It will also be claimed that Kejriwal has an old association with RSS.

I am not getting into the allegation of RSS links as I never saw anything of it or felt so but I don't disagree with the assumption that the RSS did infiltrate the Anna movement and amongst AAP supporters, there is a good number of people with allegiance to the RSS. But to call AAP and Kejriwal a stooge of the RSS is too much. Kejriwal is perhaps one of the smartest politicians in the opposition camp. He realised the importance of Hindutva politics much before Rahul Gandhi started hopping from one temple to another.

AAP won 67 seats in the previous election, limiting the BJP to three and the Congress to zero seats

The BJP, since Modi became the helmsman of the party, has succeeded in creating a Hindu vote bank. It is akin to the Muslim vote bank nurtured by the Congress and others over the last few decades. This vote bank is militant; it unabashedly pursues Hindutva ideology and is never sorry about attacking minorities, especially Muslims. With the rise of this vote bank, the anti-Muslim pitch has been gaining momentum. When this political Hindu is married to the idea of India becoming a Vishwa Guru, it becomes a deadly cocktail which has won state after state for the BJP. Kejriwal has realised that there is a Hindu vote bank vis-a-vis a Muslim vote bank in Delhi. He has also realised that the Muslim vote bank, being a minority, has a tendency to vote en bloc and since Modi became Prime Minister, they consciously vote for a party which seems to be in a position to defeat the BJP.

During the 2013 assembly elections, Muslim voters could not ascertain whether AAP could defeat the BJP. Division of votes led to the Congress winning eight seats in Delhi, with the majority of these seats from Muslim-dominated constituencies. This was one of the major reasons for AAP not getting a majority, it won only 28 seats and had to form the government with the support of Congress MLAs. In these constituencies, I was told at the time by Muslim voters that they would not repeat that mistake again. No wonder the Congress could not open its electoral account in 2015. Division of votes is a thing of the past. Kejriwal knows this well.

Assured of Muslim votes, Kejriwal has not engaged with the BJP on the issue of Hindutva. He has consciously tried to woo Hindu voters. He had refrained himself and his party from being seen in the company of Muslim leaders. Let us not forget that the edifice of Hindutva has been built by the BJP on the foundations of Muslim appeasement by secular parties.

The rhetoric used by BJP leaders in this election is brazenly anti-Islamic. Shaheen Bagh has consciously been targeted and labeled a protest by Muslims. Prime Minister Modi himself took the name of Seelampur, Jamia and Shaheen Bagh at his rally at Karkardooma. All these areas house a large number of Muslims. In an election rally in Delhi, Uttar Pradesh Chief Minister Yogi Adityanath said that "Kejriwal serves biryani to Shaheen Bagh protesters." For the BJP's vote base, biryani is synonymous with Muslims. Adityanath very crudely tried to allege to Hindu voters that Kejriwal cares only for Muslims. BJP spokesman Sambit Patra released on behalf of the party a video in which JNU student Sharjeel Imam is heard advocating the cutting off of Assam from the rest of the India to force the Modi government to listen to anti-CAA-protestors. A fake video was circulated by the BJP IT cell where a slogan can be heard - "Jinnahwali Azadi". In every TV debate, BJP leaders have been vociferously mentioning Jinnahwali Azadi and targeting Sharjeel Imam to remind Hindu voters about the partition and creation of Pakistan in the name of Islam.

Kejriwal, in a bid to grab Muslim voters, could have swallowed the BJP bait and attacked it for calling Muslims anti-national. But he did not. He skirted the issue. He asked his party men not to respond to anti-Muslim rants so as not to be seen fighting for the Muslim cause. Instead, he is going all out to flaunt himself as a Hindu who is rooted in Hindu family values. He let his mother bless him in the traditional Hindu way when he filed his nomination and later made sure that such pictures went viral on social media. 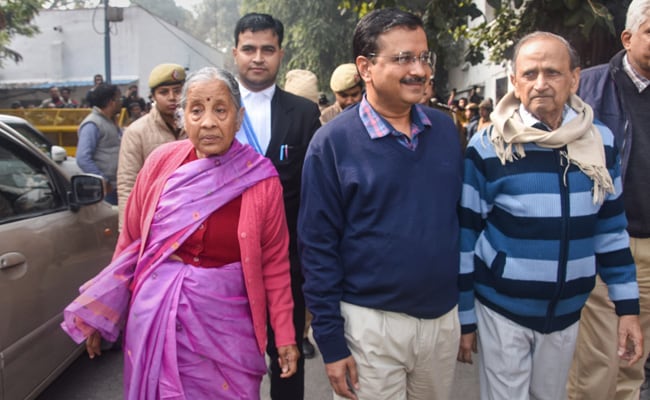 Arvind Kejriwal with his parents

The Delhi government has made special arrangements every year for visiting Kanwariyas. Special tents were erected. Posters and banners welcoming Kanwariyas were splashed all over the city. His party was seen mixing with Kanwariyas. For senior citizens, his government made special provisions for religious pilgrims. Though the scheme covers all religions, the aim is to lure Hindus. In its manifesto, the Aam Aadmi Party has promised that in the next five years, ten lakh senior citizens will be accorded a free pilgrimage. Our secular friends will surely call this mixing religion with politics and pursuing soft Hindutva.

In an ideal situation, this charge may be true. But that time has passed. Nehru was against the then President Rajendra Prasad going to the Somnath temple in his official capacity as the President of the Republic. That was when Left ideology was a powerful discourse. Religion in politics was abhorred. As a part of the global narrative, religion was to be entertained only in a private space. But we are now in Modi's era. He wears the Hindu religion on his sleeve. He never loses an opportunity to portray himself as a Hindu Leader who is working 24x7 for the betterment of Hindus.

Hindutva today is the dominant ideology. Leftism is bracketed as a foreign and discredited idea. It is in this context that to fight the BJP, one needs to change the old narrative. Contemporary political optics demands that Hindu identity be reinforced to win the confidence of Hindu voters. Recitation of the Hanuman Chalisa is an electorally smart move to avoid being painted as a leader who only cares for Muslims and feeds biryani to Shaheen Bagh protesters.