So, has Rakesh Tikait finally emerged as the face of the farmers' movement? He is making all kinds of statements: threatening the Modi Government with burning crops to teach it a lesson; announcing that farmers will remain on protest at the borders till October 2. He is moving to address one panchayat after another. He is the flavour of the month on television as well as digital media. But is he really the answer that the farmers need - or is he a reflection of the crisis towards which the movement seems to be heading?

There is no denying the fact that Tikait's tears have given a new lease of life to the agitation after the Republic Day violence in Delhi. The Red Fort riot was the lowest point of the movement, it was the opportunity that the government was looking for to discredit the movement. Farmers were defensive and beaten, 'Godi Media' went for the kill, and critics of farmers' unions were ecstatic. But then the video emerged of Tikait, 51, in tears, vowing that farmers would not give up, asking that others join the protest camps - and suddenly, things were different. It was like Dev Anand's movie, Guide, re-enacted - a vagabond turned into a Mahatma.

Tikait has undoubtedly given a face to the movement - but I would argue that the biggest strength of the movement was its facelessness. A committee of leaders was in charge; they would decide the plan of action. Tikait was not a member of this committee. When farmers of Punjab started the movement and marched towards Delhi as early as November, he was nowhere to be seen. As farmers were stopped at the borders, and the movement gained traction, Tikait extended support to the movement and joined the sit-in protest at the Ghazipur border. He was first noticed when he was separately invited by the government for negotiations. He was immediately suspected to be working for the government - this theory was bolstered by the fact that in 2013, he played a key role in organizing the massive mahapanchayat that led to huge Hindu-Muslim riots in Muzaffarnagar, allowing the BJP a huge sweep in the general election just a year later. 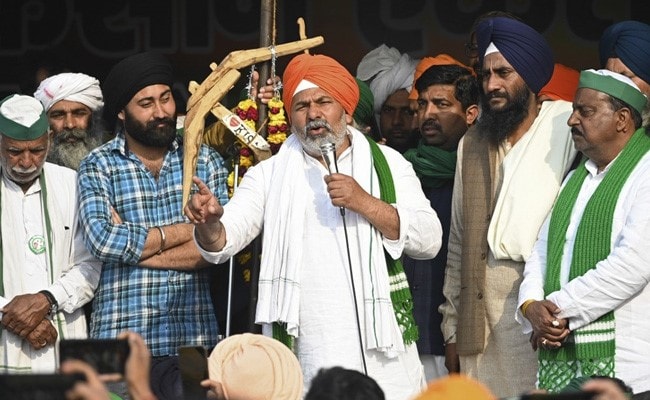 Tikat's tears, caught on camera, and viral on social media, restored his credibility. But his own political ambition has never been in question. He has contested Lok Sabha elections in the past. His ascension in the farmers' movement has also given an entry point to the Jat farmers of Western UP; before this, the farmers' protests were led by and associated with mainly Sikh farmer. The top leaders of the movement still maintain a low profile and they doubt Tikait's intent, unable to cast aside aspersions that he is vastly promoted by the government and its media friends to hijack the movement at a later stage. These leaders are upset that he has attained a certain amount of autonomy in the movement. This unease was reflected in the statement on February 20 of another farmer leader, Gurnam Singh Chaduni. He contradicted Tikait's statement that farmers would sit on protest till 2nd of October. He said it had not been decided by the committee, this was Tikait's personal view. Nobody really knows if Tikait is the Trojan horse in the movement, but his presence has definitely created fissures among leaders.

If the committee is for the most part united and firm, Tikait won't be that big a problem. The committee's bigger headache is that the government has stopped responding to farmers' demands and the number of farmers at the borders is diminishing, especially at the Ghazipur border. The last meeting that the farmers had with the government was on January 22. A month has passed and except for the Prime Minister saying that he is one call away, no other communication is being established for any fresh talks or negotiations. There is no back channel contact either. The Prime Minister has meanwhile ridiculed the movement's leaders by calling them 'Andolanjeevi', a clear indicator that the government has made up its mind to let the movement tire itself out.

The maha-panchyat at Jind, Haryana

The Anna Hazare movement in 2011 survived because the Manmohan Singh Government was responsive and kept engaging with Anna's team. There is no denying the fact that the Modi Government held more than 10 rounds of talks with farmer leaders. The government did show some flexibility. It did concede to suspend farm laws for 18 months. The farmers should have seized the moment, proclaimed their victory and suspended the movement for a future battle. But they missed a big opportunity and now, the government's non-response is creating anxiety, uncertainty and listlessness. In the absence of a government response, the movement does not know what is the way forward. The old enthusiasm and energy are missing, resulting in a thinning of the crowd at the morchas. Leaders are worried. A new mobilisation drive is being attempted in Punjab, Haryana and Western UP to ensure better attendance at the camp sites at Delhi borders.

The farmers also have to fight another battle. The misinformation campaign and the vicious propaganda against the agitating farmers seems to be unending on social media. A narrative is being created that the movement is a proxy war unleashed by anti-national elements, that it is internationally being coordinated by the friends of Khalistan. The carpet-bombing of tweets by top Indian celebrities after the Rihanna and Greta Thunberg tweets was part of this larger design. The arrest of young climate activist Disha Ravi is to reinforce that sentiment. On TV screens, focus has shifted. If this continues for long, demoralisation will set in. Not that the farmers are unaware of this new situation. To maintain a brave face, they claim that the movement is now moving to the hinterlands and that small and big rallies are being organised in villages. A campaign is also being launched to boycott BJP leaders in parts of Western UP, a region key to the party's big hold on the state. Farmers are now threatening to teach the BJP a lesson in elections. The Punjab municipal elections, which were a huge shot in the arm for the Congress, are being cited. The BJP has hed a high-level meeting with its leaders from Punjab, Haryana, Rajasthan and Western UP, and a plan to reach out to farmers is being chalked out.

The farmers should not forget that the BJP has an unmatched electoral machine and immense resources to successfully neutralize any impact they may plan for. And the Opposition should not forget that support on a particular issue and electoral behaviour are two different perspectives. It is not necessary that farmers who are opposed to the farm laws and support the movement will vote against the BJP. Remember that small and medium-sized entrepreneurs who were ruined by demonetisation and GST voted for Modi and the BJP in 2019.

What farmers need to do now is get the government to re-engage with them. That can happen only if their numbers at protest sites builds.