Rajnath Singh, Defence Minister, has transformed himself into the preeminent hawk of the Modi government.

Singh, 68, has taken to breathing fire at Pakistan at well-calibrated intervals, running the gamut from bellicose claims about Pakistan Occupied Kashmir (PoK) to warnings about India not being bound by a policy of "no first use" of nuclear weapons.

Less than 24 hours ago, he said that Pakistan can soon be blacklisted by the international anti-terror body FATF; six days ago, Singh reminded Pakistan about its break up  and the creation of Bangladesh in 1971 and issued a warning to "mend your ways". A week ago, he repeated an earlier declaration that "any future talks with Pakistan will be on PoK not J&K".

Singh's makeover into hawk is no accident. He was the strong, silent and capable Home Minister in the first Modi government, maintaining a very low profile in keeping with the unwritten script that Modi's ministers were to be seen not heard. This time around, the move from North Block (MHA) to South Block (MoD) seems to have galvanised Singh. Two weeks ago, he took a ride in the indigenous fighter plane Tejas dressed in a compression suit, a far cry from the dhoti-kurta look he prefers. 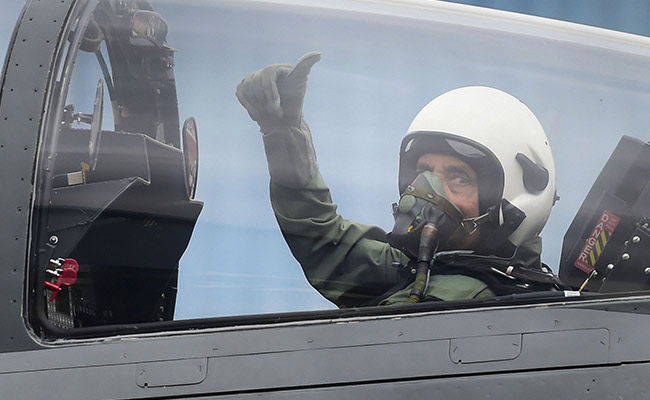 Modi has asked Singh to take on a starring role in India's comprehensive attack against Pakistan. This does two things: protects Modi, the principal leader, from having to sound the most aggressive of them all, and allows him to be above the India-Pakistan fray as a statesman. It also quite neatly snubs Imran Khan, Pakistan Prime Minister, when Modi does not bother to react to him, leaving it to his ministers to respond to Khan's many provocations.

Singh, a shrewd politician close to the RSS, has also grabbed the opportunity to endear himself to the Sangh and the BJP base to whom attacks on Pakistan are always a good thing. So while Modi is now cast in a global gatekeeper role, Amit Shah, Home Minister, talks tough on Kashmir and Assam, and  Singh takes  the fight to beyond the borders.

A two-time  BJP President, Singh had earlier cast himself in the mould of a farmer leader (the aforementioned dhoti) and modelled his speeches on his political idol, the late former Prime Minister Atal Behari Vajpayee. In fact, I had asked him in a television interview whether he owed his political mien to Atal-ji. Singh had laughed and said that both of them were from Uttar Pradesh and that the former PM was his political idol.

Sources close to Singh say that he is enjoying this tenure as Raksha Mantri with a much higher profile than before. "Mananiye (respected) always had the same views, it is just that he can now go public with them". Not quite, as the new hawkish Singh earlier projected himself as a dove and talked about "Atal-ji's promise of insaniyat (humanity) in Kashmir".

But that was then. The new, hawkish Singh is thrilling the Sangh Parivar. This has also allowed Singh to break the perception that he was part of the Lutyens' leadership of the BJP. Singh was bracketed as a trio with the late Arun Jaitley and Sushma Swaraj. Singh has broken out of that casting to be seen now as closely attached to the Modi-Shah duo, quite  a huge leap within the party and government. Which means He will continue to make the threats to keep Pakistan off balance.