Opinion: No, Modi-ji, We Did Not Get Independence In 2014

Early in this new year, the incumbent government has taken yet another shot at rewriting history and pumping up the 'New India' narrative. Just a few days before the celebrations of the 73rd Republic Day, it announced the eternal flame at the Amar Jawan Jyoti at India Gate will be "merged" with the newer war memorial inaugurated in 2019.

The memorial was established in 1972 to mark India's victory over Pakistan in 1971. This announcement to 'merge' the eternal flame came just a day ahead, probably to ensure that it was carried out without much debate - sadly, a mechanism citizens of this country have become well-accustomed to over the last eight years. The dust had not settled when the government announced "Abide With Me" - a favourite of Mahatma Gandhi which that has been part of the Beating Retreat ceremony since 1950 - would be dropped. The government seems hellbent on reinventing 'New India' by erasing decades-old traditions.

The Amar Jyoti or eternal flame which had been burning for 50 years, stood as a symbol of valour and bravery of the Indian soldiers who lost their lives in the line of duty. But it was reduced to nothing, by both the actions and words of the government. The government justified the 'merging' saying India Gate was a symbol of the 'colonial past'. The following words are inscribed on India Gate:

"To the dead of the Indian armies who fell and are honoured in France and Flanders, Mesopotamia and Persia, East Africa, Gallipoli and elsewhere in the Near and the Far East and in sacred memory also of those whose names are here recorded and who fell in India on the North-West Frontier and during the Third Afghan War". 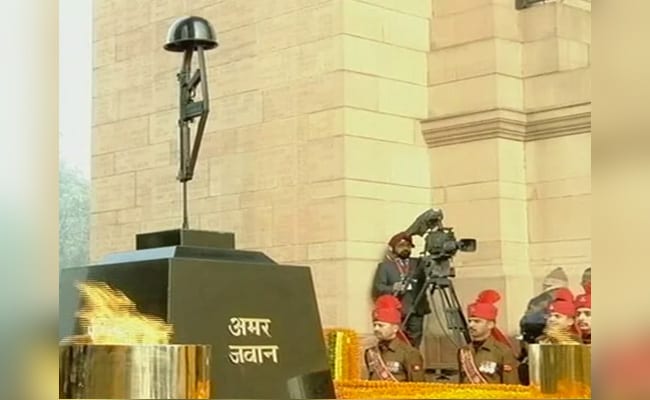 The government's dismissal of India Gate as a symbol of India's colonial past disregards and disrespects the sacrifices and bravery of the Indian soldiers who laid down their lives in the quest for building the present nation. Even when the new War Memorial was inaugurated, the government categorically said that the Amar Jyoti would continue to burn at India Gate. Similarly, the staple tune "Abide with Me" has been dropped under the garb of reinventing India, but this is an India conforming to their selective narrative.

A secure nation under 'strong leadership' will always be strong in its belief and actions, a secure nation will learn lessons from the past to create a better future for itself, a secure nation will allow its citizens to see its painful past, its fall and its rise - as raw as the events turned out to be. But it is not the case with this government clearly - it tried to 'beautify' the precincts of Amritsar's Jallianwala Bagh, the darkest chapter in India's freedom struggle; the move was slammed by all historians and even Sikhs, but the government did not care, for them everything is an 'event' - many call it desecration of memories but it does not matter to the government. The government has chosen to omit 'Abide With Me', the solemn hymn that signalled the conclusion of the Beating Retreat ceremony

If left to them, they would surely celebrate 2014 as the 'true' independence of the country. You remember a female actor saying just as much in her TV interview to an audience applauding it? Targeting history textbooks to alter the political narrative, renaming and restructuring public spaces, hijacking autonomous bodies and institutions of public importance, and silencing dissent. All these actions are part of a bigger plan to create an army of puppets that only knows how to follow blindly. This is a set pattern of rewriting events only to glorify what the government sees as its achievements and milestones.

The beauty of history is that it is a memoir of countless accounts of a variety of people which show out evolutionary journey. Hence, the importance lies in the journey from the past to the present. One cannot deny India's colonial past, and dismissing the sacrifices of Indian troops is disrespectful of the years of struggle we went through as a country.

Despite the government's ignorance, I believe the people of country will not overlook our past - or the monuments to it. India's well-deserved and much-delayed National War Memorial has our support, of course - but it's unclear why the flame couldn't continue paying homage to soldiers at both places. The only explanation is that this is a vindictive and insecure government which wants only its own decisions to be seen as worth remembering.