The law of unintended consequences works in strange ways. An overzealous Delhi Police made the cardinal error of arresting a minor student leader, that too on sedition charges, from JNU, the bastion of the Left and the extreme Left. All hell broke loose on this arrest. Our right to freedom of expression, protected by 69 years of freedom, multiple Supreme Court decisions, a free and cacophonous media, and a vibrant Opposition, was suddenly threatened as never before. Our age-old sedition laws, unworkable because of Supreme Court decisions, with over 8,000 cases reportedly filed in the Kundakulam case, was suddenly highlighted as an example of a Police State in India. And Kanhaiya Kumar, the poor student leader, was suddenly hailed as the new Messiah, here to liberate us from Big Brother, and the new youth icon who pushed aside the Original Youth Icon, the Vice President of India's oldest political party.

Within a fortnight, the media, the Opposition, many commentators and do-gooders had their answer to a person who could challenge PM Modi himself! Adding to this, many self-indignant citizens wrote disapprovingly of how students like Kumar were wasting hard-earned tax payers' monies by politicking instead of studying in University, depriving other students of a good education.

Of course Kumar played the role to a T. He denied making anti-national slogans. He said he never wanted azaadi from India, he attended the Afzal Guru rally to stop bad elements from mouthing offensive slogans and sought to cool tempers down, and in return, he was hounded and arrested by the police and charged with one of the biggest crimes: sedition. He was the victim, and that too from a poor family, who had worked hard and fought his way purely on merit to the greatest bastion of freedom in  India, JNU, so that he could fight for the oppressed and downtrodden. All probably true. Kumar is an idealist, though a bit misguided, espousing extreme Left causes, and a bit confused as to solutions, mouthing the stale slogans of the Left.

On release from jail, he entered JNU  triumphantly much in the way of Caesar's Entry into Rome after his conquests. He had a hero's welcome in JNU, where the more anti-establishment and more extreme one is, the more one is adored. He made a great speech with wonderful histrionics, much slogan-shouting, much gesticulation, though devoid of substance and the right statements; he said he was seeking azaadi from hunger, from oppression, from capitalism, and finally from PM Modi. All this  to a delirious response from the largely Left crowd and a media which had this as breaking news which broke all news! He was hailed by the Left as their saviour, one who would campaign for them in the forthcoming state elections and resurrect their fallen status. 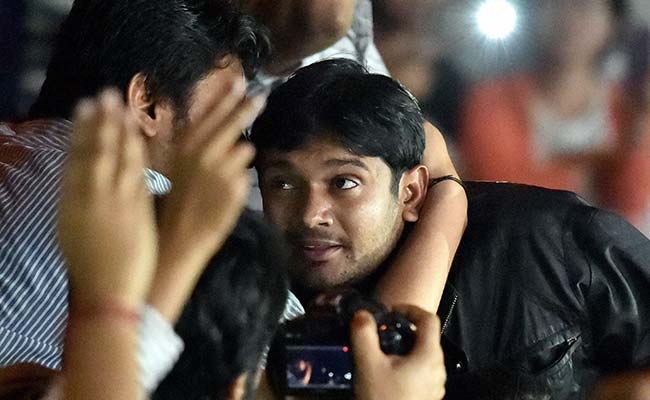 For a few days after, he was pursued by innumerable media channels, answering all questions with aplomb, again devoid of substance, with breathless media anchors including the Great Barkha who declared him the new youth icon, giving the original youth icon some real worries. Nobody ever explained what was the great idea or accomplishment that made him a youth icon.

Sadly for Kumar, the media suddenly discovered the King of Good Times, who was declared a wilful  defaulter on his bank loans, and who cut a personal sweetheart deal of $75 million with an MNC. They went after him with a vengeance, baying for his blood! Kumar was suddenly consigned to the back of beyond, having served his purpose of giving the masses great entertainment for a few days.

So how are we to understand and read the happenings at JNU?

Undoubtedly, the police made a mistake in arresting a minor student union leader in a Leftist institution. Undoubtedly, the government and the ruling party made a mistake in making this a case of nationalism and patriotism, falling into the trap set by the Left and extreme Left. The lawyers of Patiala Court suddenly saw a chance to prove their extreme nationalism and patriotism, indulging in violence, forgetting their duty to the rule of law and covered themselves with shame. The government had egg on its face being portrayed in India and overseas as not protecting freedom of expression in a democracy, being dictatorial, accused of creating Emergency-like conditions by Leftist academia globally led by the Great Master himself, Noam Chomsky.

It was in essence a comedy of errors, grand entertainment, much like the great Roman Circus, fed to the masses to divert their attention from their growing disenchantment with perverse Opposition politics which was holding the nation to ransom.

What of Kumar himself? Poor Kumar is now left alone, with the great cause of being the Saviour of the Nation behind him and no greater cause to fight for, except living off stale slogans. Sadly, after all the excitement and the media attention, he is left alone to fight the sedition cases probably for the next 20 years under the gaze of a sullen police keeping watch over him. At age 28, he soon will need to complete his PhD, go out into the brave new world to eke out a living, or carry on being a revolutionary in an era where revolutions are passe, joining a political party which is a ghost of its past. He will discover that mere slogans in JNU are no solutions to society's challenges and even the Great Yechury, India's version of Che Guevara himself, from the same JNU, after decades of revolution, has hardly made any impact despite being the flag bearer of a failed-ideology!

Kanhaiya, all of us admire you for your passion, your energy, your eloquence, your courage, your forthrightness, much as we disagree with your views and your slogans, because we see in you the idealism we had when we were in college and wish you all the best for the future!