How A Kerala Mother Copes With Her Daughter's Rape And Murder

The news that the Kerala Special Investigation Team have arrested the criminal responsible for the barbaric rape and murder of a young Kerala law student, will bring some solace to her grieving mother Rajeswari. The team should be congratulated for their focused work which succeeded in identifying and arresting the criminal.

It is 48 days since that terrible evening on April 28 when Rajeswari, coming home from work, banged on the front door of her modest home and got no response. She did not know then that the daughter she lived for had been brutally killed, and was lying lifeless in the dark back room.

One of the first decisions taken by the LDF government after it was sworn in last month was to set up an SIT headed by a senior woman officer for the Jisha case. Under the previous UDF government, much of the evidence had been destroyed - by design, many said. None of the top police officers supposed to be in charge of the case found it necessary, for example, to cordon off the site of the crime which was invaded by scores of curious onlookers, destroying any clues or evidence which may have been available. There were no searches conducted, no teams sent to bus stops or railway stations, no attempt to handle even the minimum requirements of an investigation.

In the eyes of the police, the case had little value: the victim was poor, Dalit and it was an all-women family. When class, caste and gender discrimination come together, as in this case, the injustice becomes insurmountable for the families of victims.

Rajeswari is presently still in the hospital as a sort of half-way recovery home. The LDF government is building a home for her in a neighbouring panchayat and has granted her a monthly pension of Rs 5,000. Her other daughter Deepa, who has shifted back to live with her mother after Jisha's murder, has been given a job as an attendant in the taluka office. It is welcome that the government took urgent action to help the family as a priority on its agenda. This is in clear contrast to what is happening in the Rohith Vemula case where the family, Rohith's mother, and his brilliant and well-qualified brother Raja have received no help at all from either the Andhra Pradesh or the Telengana governments.

But for Rajeswari, it is too little too late, she is filled with anger and sadness, she wants nothing but justice for her daughter Jisha.

She says her whole life has been one of struggle. Born into a poor Ezhava family, she was the eldest of the siblings from the three marriages of her mother. It was she who started working from the age of 13 to help bring up her brothers, children of a different father. Later when Rajeswari, breaking tradition, chose to marry a Dalit, she faced strong opposition from her brothers and more so, her sisters-in-law. The subsequent estrangement reportedly continued even after her marriage broke up. She brought up her daughters, Jisha, and the elder girl Deepa on her own, doing a double shift: a cleaner in the hospital in the morning and working in a women's catering cooperative in the evening. She also worked as an agricultural worker. She worked long hours so that her daughters could, in her words, "escape the hard days". She believed that education was key to giving them a chance. 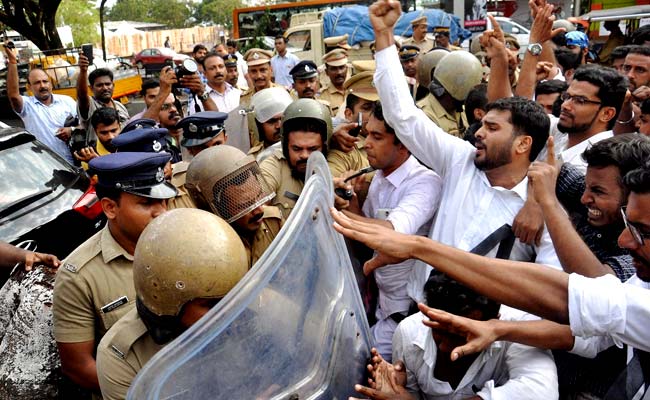 Massive protests erupted in Kerala after the brutal rape and murder of Kerala law student, Jisha.

So her heart broke when her elder daughter got married to an upper caste boy without completing school and without telling her. When Deepa's marriage collapsed, she did not come home to her mother but moved into her uncle's home with her little boy.

So the two women, Rajeswari and Jisha, mother and daughter, were on their own, living in a small house consisting of one long room, divided into three. Their house was on government land by the Periyar Valley canal. In this village, there are 26 families living by the narrow canal, of which 23 are Dalit families. Unlike the others who live next door to each other, Rajeswari's house is on the other side, isolated, at the corner, and in stark contrast to the much better appointed homes of her better off neighbours. The others had access to water, but she had no water connection, so either she or Jisha had to collect the water from a public tap some distance away or from a neighbour's well. This was clearly highly discriminatory.

Although the family had been identified as BPL in the panchayat list, the ration card had not been issued by the Taluka office. Thus she was denied both water and subsidised food. Since she herself is not a Dalit, she was denied any benefits under SC schemes. It was only on the intervention of the then MLA that she finally got the sanction for a house. The scheme itself is totally flawed since the sanctioned money, an inadequate three lakh rupees, is given in installments, forcing the "beneficiary" to take loans and become indebted to build the house at one go. Rajeswari's house remained half built. But worst of all, she says, is that her daughter, who completed her graduation, was given only a provisional certificate by the college she graduated from, while the University has still not given her the final degree certificate. This for Rajeswari was the greatest blow. Her inter-caste marriage also carried with it its own burden, resulting in worsening of family and community ties. Through the years, it took a great deal of her energy to try and resolve these and other issues that kept coming up, it shaped her sharp responses to the world.

The panchayat had been won by the LDF in the local body elections just a few months ago. The Panchayat president is an articulate Dalit woman, Soumini Babu, who lives about two km away, while the ward member, Ciji Saju, lives down the road. They agree that it was totally unfair that Rajeswari had no water connection and that they had moved to rectify this. It was the members of the panchayat, including these two women, who contacted the police, who later took a distraught Rajeswari to the hospital. It was a ward member, Anas, who had identified the body and who had first raised the issue of the brutality of the murder when the police were trying to pass it off as a suicide case; it was another ward member, Jytoish, who had contacted Deepa's employer and through him, Deepa, and taken her to her mother's side in the hospital. When the police refused even to arrange an ambulance to take the body for a post-mortem, again it was the panchayat members who made the arrangements. It was they who organized the first protest against the police callousness, giving the details of how the police had refused to call in the district administrative officer, the RDO, mandatory in a case like this. The panchayat members did play an important role at a time when people of the area were wary of cooperating with the investigation. But they will have to advance to building a socially-conscious intervention to break the cycle of social isolation imposed on families like Rajeswari's.

The deep suspicions that Rajeswari has developed towards the world, including about those who bat on her side, is based on her very real experiences of the deeply embedded nature of the social, economic and caste-based discrimination faced by a poor woman-headed family. It is systemic, not an aberration. It is this reality that must inform any alternative policy framework to bring justice. The requirements for a safe, secure home, including for those mainly Dalit families living on the edge of the canal without pattas include the access to minimum necessities like electricity, sanitation and water, the guarantee of an education with dignity, the conscious elimination of socially discriminatory casteist practices.

In Kerala in particular where such rights have been achieved for large sections of the population, the deprivation and discrimination faced by Rajeswari goes beyond an individual experience and life and stands out as an alert for a more comprehensive policy framework for Dalit, tribal and other deprived communities. The shocking condition of Dalit and tribal communities in several pockets and settlements shows the urgent need for action.

The criminal brutally killed a young woman, he committed the most savage atrocities on her. His actions were inhuman. He must be punished through a fast track court. Communal elements will no doubt try to take forward a different communal agenda using his religion and his status as a migrant worker. This must not be allowed. The struggle to ensure that the range of issues highlighted by the Jisha case are properly addressed and resolved must lead to an alternative policy framework. Only this will bring justice to the young woman who was struck down on her way to fulfilling her dream and that of her mother's to move away from the dark waters of the canal and all that it represented.

Disclaimer: The opinions expressed within this article are the personal opinions of the author. The facts and opinions appearing in the article do not reflect the views of NDTV and NDTV does not assume any responsibility or liability for the same.
Comments
Kerala law student rapeJisha rape and murderKerala's nirbhayaBrinda Karat