Air Pollution In India - Think Beyond Delhi And Beyond Winter

- Air pollution is not just a winter time (seasonal) issue, and year-round engagement and effort is required.

- Our personal exposure to air pollution is often higher than ambient levels. 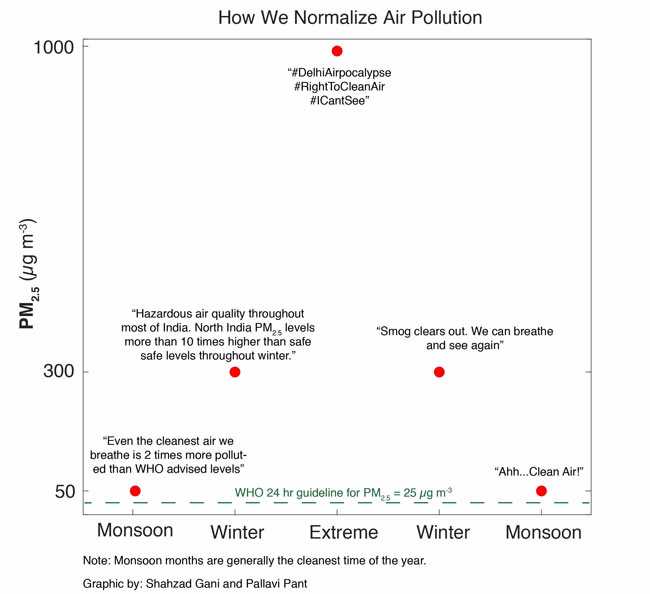 Every winter, Delhi finds itself in the national and international spotlight for poor air quality, and the slew of media reports tout it as the 'most polluted city' in the world, a 'gas chamber' and 'unfit for living'. The unfavorable meteorology and additional sources (e.g., increased solid fuel use for heating, or crop residue burning) lead to episodes of air pollution that are some of the worst observed anywhere in the world. In early November, concentrations of PM2.5 (particles smaller than 2.5µm and known to be harmful for human health) in Delhi at times were ~100 times higher than levels deemed safe by the World Health Organization (WHO) (Figure 1). Interestingly, the same scenario played out last year, when Delhi's air was thick with smoke for nearly a week, and everyone pledged to act. Protests were held, people expressed outrage on social media; in response, government agencies designed the Graded Response Action Plan (GRAP) which, to date, has not been effectively implemented even in one instance. However, the smog cleared in time, and our collective fury towards government's inaction temporarily subsided.

While episodes like this are indeed worrying (with specific health and economic impacts) and deserve immediate and absolute attention, discussing air quality only during episodic conditions risks normalizing air pollution for the rest of the year. In addition to the very high levels of PM2.5 during the winter months, unhealthy levels of air pollution are observed throughout the year (Figure 2). Even during the 'cleaner' seasons when the air seems relatively free of 'smog', the levels of air pollutants we breathe is unhealthy. It is also important to understand that there are air pollution episodes over relatively short periods of time (e.g. Delhi Smog Episode of 2016, Delhi Smog Episode of 2017, Diwali episodes) with extremely unhealthy air leading to high acute exposures, and then there is chronic, long-term exposure to high levels of PM all year round. The episodes are often triggered by a combination of a specific emissions source, and adverse weather conditions (e.g., temperature inversions, very low wind speeds leading to stagnant air), and need specific, immediate steps to protect public health (e.g. shutting down power plants, restricting the number of vehicles on the road etc.); long-term exposures require strategic policy interventions aimed at reducing air pollution at the source. It is also crucial to distinguish between sources with seasonal relevance, and those that play a role all-year round. Traffic and waste burning, for example, are relevant across seasons, while sources such as crop stubble burning or solid fuel use (especially for heating) are relevant only during specific times in a year. After several cycles of extreme air pollution episodes, and dire warnings regarding health impacts, aren't we at the point where we can move away from simply reporting how poor the air quality is, and towards a nuanced discussion on how specific interventions across sectors can be implemented in order to ensure year-round clean air across India?

Even as the media coverage continues to focus largely on Delhi, data from research studies, national monitoring and satellite retrievals show unequivocally that the winter smog impacts large parts of north India with people across state lines breathing a stew of toxic air. Given the scale of the problem, it is vital that we take the air pollution discourse beyond Delhi, and pay attention to the fact that while our current narrative focuses largely on Delhi, residents across Indian cities and towns are grappling with the same problem. Cities throughout the country where PM2.5 data is available show average winter levels 2-10 times higher than the WHO guidelines (Figure 3, note that data for PM2.5 is currently available for ~50 cities across India under the national regulatory monitoring program). Given the significant health burden associated with air pollution, it is imperative to shift the discourse on air pollution from a Delhi centric to a national one, from a winter episodic to a year-round one. 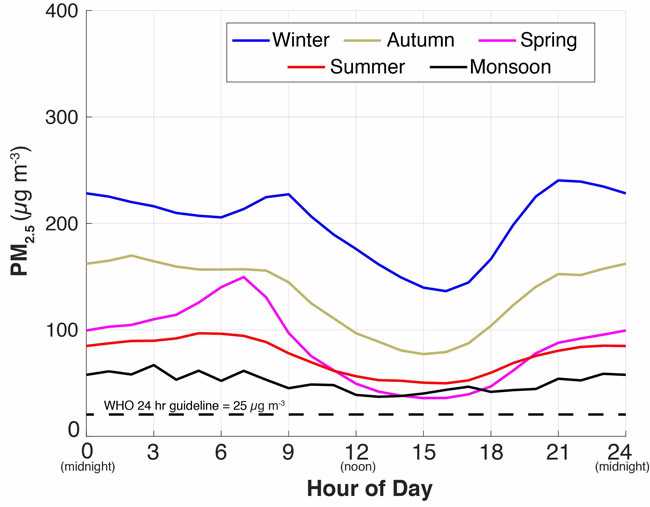 Figure 2: Seasonal variation of air pollution for Delhi over a 24 hour period 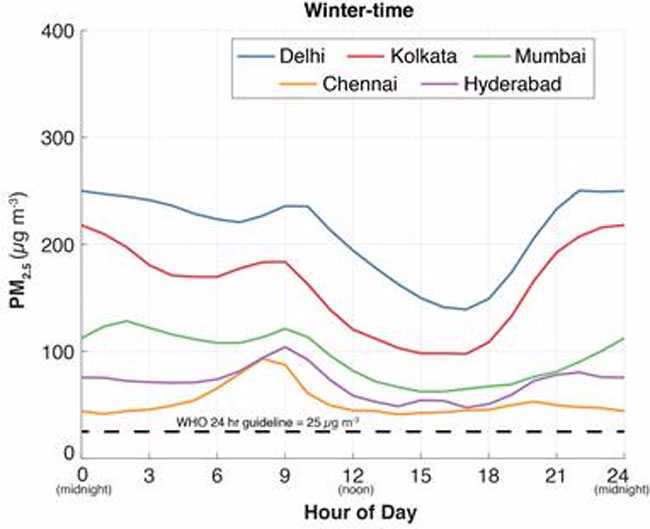 Furthermore, let the lack of data and media coverage not lead you to believe that air pollution is not a problem beyond the mega cities. Air pollution is ubiquitous across the country and is a significant problem in the cities, towns and villages where air quality is not monitored. Even for places where we have access to ambient air quality data, it is important to note that our exposure to air pollutants can often be significantly higher than ambient levels, since we do not breathe air exclusively on rooftops where monitoring stations are placed. Given mixed land-use and high population densities in our cities and towns, most of us live in close proximity to sources such as traffic hotspots, power plants, waste burning, solid fuel use, etc. and breathe highly polluted air.

Ensuring clean air for everyone in India will require a long-term plan and sustained effort, and the first step is to realize that air pollution affects residents across the country, and across seasons. Per Article 21 of the Indian constitution, all Indians have the right to clean air, but to turn it into a reality, we need sustained, consistent engagement across all levels of government, civil society and the citizenry.

Promoted
Listen to the latest songs, only on JioSaavn.com
(Shahzad Gani is a doctoral student at the University of Texas at Austin. Pallavi Pant is a postdoctoral researcher at University of Massachusetts Amherst.)