Here is a refresher: a press conference is an event at which one is asked unscripted questions by a group of journalists and one answers them. Given that Prime Minister Narendra Modi's appearance before some members of the press did not satisfy these criteria, it is extraordinary that it was nevertheless billed by some as "PM Modi's first press conference". That's like seeing Modi at the stands during a cricket match and declaring "PM Modi wins World Cup".

On some level, this should not surprise us. A Prime Minister who answers no questions and a supine press corps that barely dares to ask him anything are together two of the most obvious representations of the past five years you could have asked for. It was nice to have another reminder of this as India's voters prepare to cast their votes in the seventh and last round of the election.

It was a pretty surprising sight, though. The one thing one would say for Narendra Modi is that he does not lack self-confidence. Yet he referred all questions to his deputy, who said it wasn't necessary for the PM to answer questions. The image of Modi sitting silently as Amit Shah fielded questions that he should be answering...what does that say? Modi was not elected for his silence. He was not elected for his timidity. He was not elected to be muzzled by his party president. I thought all those were things we hated about Manmohan Singh, which is why we turned to Modi, his polar opposite. But it seems that things have turned full circle.

Still, we are a few days away from the results of what appears to have been an unexpectedly competitive election. Why would the Prime Minister even try to turn up? It can't be because of his love and respect for the fourth estate. We know, especially after his interview to The Indian Express, that the Prime Minister does not esteem the journalistic profession highly. (In his defence, this is an opinion shared by many in India, including in the journalistic profession.) So why was he there? Here are a couple of possibilities.

First, perhaps he just wanted to tick it off his list. He was tired of hearing Rahul Gandhi constantly saying the Prime Minister ducks press conferences. Why not silence Rahul by turning up in a room that also has journalists in it and pretending it's a press conference? Modi likes to say he was "the first PM" to do this, that, and the other but perhaps even he balked at being "first PM to not have a press conference in India". 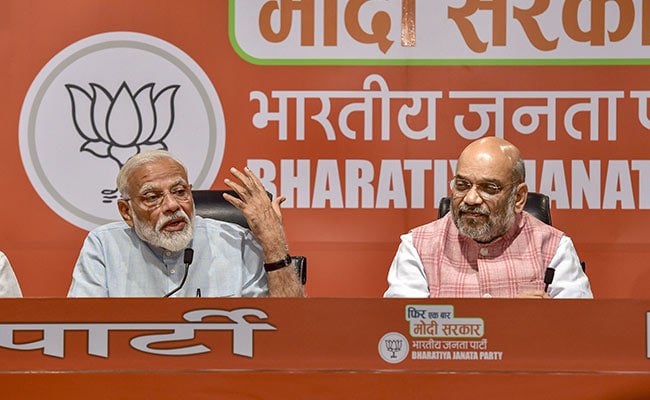 Second, it might have been just another way of monopolising the airwaves. Like Trump, Modi knows the best publicity is free publicity, and TV screens that show him looking bored while Amit Shah drones on are TV screens that aren't switching to the Congress' press conference elsewhere. Plus, it may help you deal with those pesky campaigning restrictions that the Election Commission likes to enforce.

Third, perhaps the whole Godse vs Gandhi thing had gotten him rattled. Now everyone knows that when Union Minister Ananth Hegde (he has subsequently claimed his account was hacked), Bhopal candidate Pragya Thakur and others defended Mahatma Gandhi's murderer, they were in fact speaking for a large section of India, which includes most of the Sangh Parivar. This is plainly obvious, given that this section of people openly reveres Savarkar, whose portrait hangs in Amit Shah's room, and whom Modi has described as one of his icons. And Gandhi's murder, as AG Noorani reminds us, was described by Sardar Patel thus: "It was a fanatical wing of the Hindu Mahasabha directly under Savarkar that [hatched] the conspiracy and saw it through". How can you revere Savarkar while attacking his instrument?

But, sadly, in openly stating Godse-love, the BJP for once got ahead of its electorate. No doubt after another five years of BJP, Rajghat could be torn up and replaced with a Godse Mandir, but it seems India's not quite there yet. Maybe Modi arrived for that press briefing to continue his attempt to distance himself from his own ministers and candidates.

Fourth, it was perhaps an attempt to appear approachable, just a regular politician who meets the press and answers questions. After five years of setting himself up on a pedestal - quite literally, given that he used to meet his MPs while sitting on a "throne" on a dais - the Prime Minister may be trying for a belated softening of his image in anticipation of results that may require the BJP to rely on some regional parties not currently in the National Democratic Alliance.

Or, finally, perhaps it was because nobody asked the really important questions: namely, whether the Prime Minister likes mangoes. Or whether he carries a wallet.

The truth is that Modi should have had regular press conferences as Prime Minister, even if he despises the media. Even for his own base, that would have been a satisfying experience. Modi would have deployed a certain amount of his trademark angry wit at the unfortunate journalists, and his core voters would have applauded. The rest of us would have perhaps had an opportunity to have the Prime Minister explain why he hasn't lived up to his promise to create millions of jobs, why the Swachh Bharat statistics are over-inflated, or why he made the decisions he did on the Rafale deal. That would have been healthy.

Five years ago, in his last press conference as Prime Minister, Manmohan Singh said that Modi would be a disaster as his successor, and that history would judge Singh himself kindly. Today, as Singh's successor sat wrapped in a silence even deeper than Singh's, perhaps we should accept that Manmohan Singh was, as usual, right.