Nitish Kumar was relaxed when we met at the Chief Minister's Office in Patna one winter evening last year. He spoke for an hour, reeling off figures and facts about all that he's done to improve development, especially of the social sector, in Bihar. Much of it was about empowerment of rural women, who are his most enthusiastic supporters. He explained the rationale for his anti-liquor campaign. "It's necessary not only for saving the incomes of rural households, but also for keeping peace and harmony in families," he said to me.

He interspersed his soliloquy with mild complaints about non-cooperation and non-receipt of adequate funds from the Centre. I asked him about his relationship with Prime Minister Narendra Modi. His long silence, culminating in an impish smile, was eloquent. He then answered the question by speaking not about Modi but about Atal Bihari Vajpayee, in whose government he was a cabinet minister."

That was the hint of a crack in the coalition between the BJP and Janata Dal (United) in Bihar, which he had been heading since 2017. His respectful reminiscences about Vajpayee continued, "Atal-ji sabko, apne virodhiyon ko bhi, saath le kar chalte the," he said. "Hamari baat na sirf sunte the, parantu un par turant karvaayi karte the (Vajpayee sought feedback from all including his opponents and responded to everyone)." What was unsaid, yet loudly communicated, was that Modi does not listen to his allies, much less to his opponents. 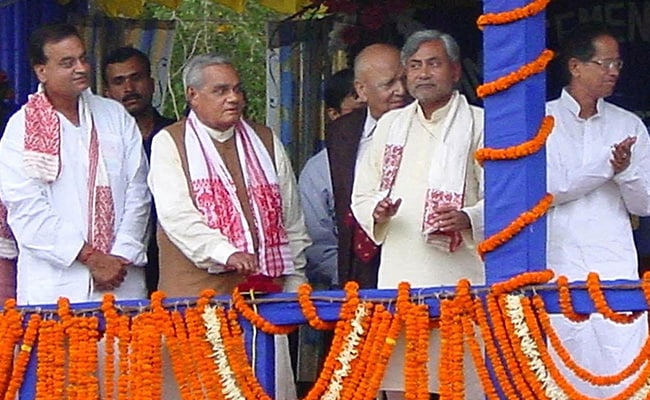 Then, in another hint that he was looking for new possibilities in his long political career, the seven-time Chief Minister casually said, "Bas ho gaya. Hum lambe samay tak Bihar ke mukhya mantri rahe hain. Aur kitna karna hai? (I have done enough. I have served as Bihar's Chief Minister for a long time. What more is to be done?")

Nitish Kumar's studied silence on Modi, combined with his remark about a long innings in Bihar, prompted me to broach the main subject I wanted to discuss with him. "Nitish-ji, there is an obvious contradiction between your ideology and the ideology that is driving Modi's government at the Centre. You are certainly not comfortable working with the new BJP under Modi and Amit Shah. Isn't it time for you to move to the national stage? Non-BJP parties lack a leader from the Hindi belt who can be a rallying force for Opposition unity. You are best suited to play that role."

Again, a long silence followed. He then called one of his trusted ministers, and told him, "Aap inke sampark mein rahiye. Ye kuch soch rahe hain (Be in contact with him. He has some thoughts)". He then said to me, "Before you leave Patna, you must visit two places - the Buddha Park, which we have created after demolishing the central jail in the heart of the city, and Bihar Museum. My minister will make all the arrangements for you."

I did visit the two places next morning. What I saw wowed me. Both are Nitish Kumar's pet projects, and they are world-class. "This truly is the best way to showcase Bihar to the rest of India and the world," I said to myself.

Now, Bihar is presenting itself to the rest of India in another way. Nitish Kumar has finally broken his uneasy alliance with the BJP, and joined hands with his arch rivals, Lalu Prasad Yadav's RJD and the Congress, in a new Mahagathbandhan. He will continue to be the Chief Minister, but make no mistake - this dramatic political rejig is not about Bihar 2022, it's about India 2024. Bihar gave a new turn to Indian politics in early 1970s, when Jayaprakash Narayan launched a mighty struggle against the autocratic rule of Indira Gandhi. As a young student leader, Nitish Kumar joined the JP Movement and spent 19 months in jail during the Emergency (1975-77). Now, he has raised a war cry against another autocratic rule. Different times, different circumstances. But there is one common thread. At a time when democracy and other cherished values of the Constitution are under a serious threat - the threat is greater now than during the Emergency because of the additional danger of communal polarization - Bihar appears to be providing much-needed hope.

Why will the new Mahagathbandhan in Bihar likely reshape national politics ahead of the crucial parliamentary elections in 2024? Four reasons:

1. The RJD-JD(U)-Congress is a formidable alliance in Bihar, which sends 40 MPs to the Lok Sabha. In 2019, the BJP-JD(U) combine swept the polls winning 39 seats, with the BJP bagging 17 seats, JD(U) 16 and Ram Vilas Paswan's LJP 6. The remaining one seat went to the Congress. The 'Modi Wave' in 2019, which brought the BJP back to power at the Centre with a record 303 seats, was mainly on account of the terror attack in Pulwama and India's subsequent punitive action at Balakot in Pakistan. This time around, with severe and growing economic distress in India, the Modi-led BJP can repeat its 2019 performance only if there is another Pulwama-like incident that the BJP can use to whip up nationalist sentiment in its favour. Mere Hindu-Muslim polarization caused by domestic factors, in the absence of a Pakistan angle, cannot help the BJP much. In any case, anti-Muslim politics cannot consolidate the Hindu votebank in Bihar as it does in UP.

2. In Bihar itself the BJP will be a loner sans an alliance with any major regional party. Ram Vilas Paswan is no more, and the BJP has antagonized his son Chirag Paswan by breaking the LJP. In contrast, the new RJD-JD(U)-Congress alliance has the benefit of support from Left parties, which, though small, can swing the outcome against the BJP in many constituencies.

3. India is currently witnessing a resurgence of backward caste politics. This phenomenon helped Modi significantly when he projected himself as an OBC leader. The same advantage accrues to Nitish Kumar too, especially in North Indian states.

4. Most importantly, Bihar is the first large state where the BJP has lost power. This will infuse new hope among Opposition parties at the national level, who have so far remained disunited and dispirited. The persistent question in the minds of Indian voters looking for an alternative to Modi has been: "Who is there to unite and lead the Opposition?" Neither the Congress nor any other party has an answer. Now, a likely answer has emerged from the political tremor in Bihar. Clearly, Nitish Kumar is the man to watch as a National Mahagathbandhan takes shape in the run-up to 2024.

Opinion: Nitish Kumar And The Gift Of Being Forgiven For Betrayal