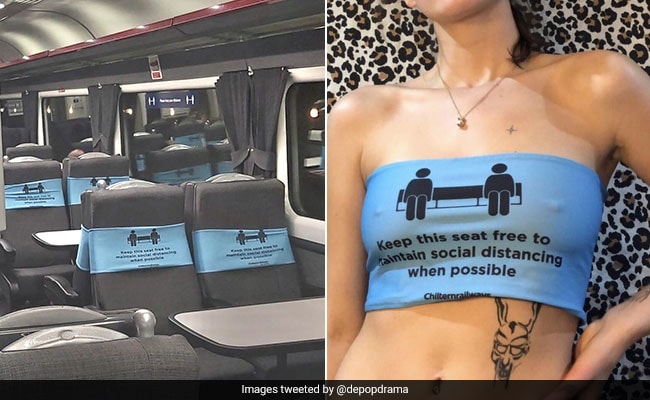 A fashion student from the UK has gone viral for trying to sell a rail company's social distancing signs as crop tops. Mhari Thurston-Tyler turned social distancing seat covers from Chiltern Railways into crop tops and tried to sell them on shopping app Depop for 15 pounds each, reports BBC.

Depop said the item "clearly violates our terms of service" and warned Ms Thurston-Tyler not to sell prohibited items on the app.

"Got a few of these, can do sizes," she wrote. "Message me before buying or with questions / offers."

The listing went viral on social media after being shared by Depop Drama's Twitter and Instagram accounts.

i am lost for words pic.twitter.com/MnwE5aL6Mx

While Depop confirmed that the crop top listing had been taken down and "the user has admitted it was taken from a Chiltern Railways train", Ms Thurston-Tyler denies stealing the seat covers.

She told Metro News that she found the signs discarded on the floor outside London's Marylebone station.

"I am struggling financially and thought I could try and make some money off it so put it on Depop," she said. "'I also thought it would be an interesting article of clothing a few years down the line as it is quintessentially not normal and extraordinary as a concept to me."

She said she refunded a customer who bought the crop top for 15 pounds and took down her listing as she did not want to be accused to theft.

"I didn't steal it but I understand it's not right to re-sell it," she said.