Woman Gives Birth In Restaurant, Baby Girl To Get Free Food For Life 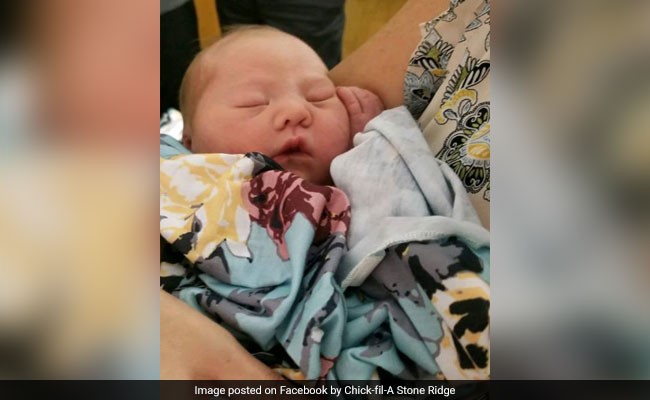 "We not only deliver food, but we help deliver babies," announced popular US food chain Chick-fil-A on Facebook, sharing a sweet picture of a baby girl who was delivered in their washroom on July 17. The astonishing incident happened as employees at the Chick-fil-A store in San Antonio, Texas, were closing up for the night when they heard an urgent knock on their door. They never suspected that a few minutes later, they would be helping a woman give birth in their washroom.

The story of the Chick-fil-A birth was shared by the baby's father, Robert Griffin, on Facebook and has since gone massively viral. In a Facebook post that has garnered over 3 lakh 'likes', Robert details how he and his wife Maggie were on their way to the hospital when they stopped at the Chick-fil-A restaurant to drop off their elder daughters with a friend.

"Maggie was in active labor and said she REALLY had to go to the bathroom," he wrote. So after he dropped off his daughters with his friend, Robert went inside the restaurant to look for his wife.

"The manager said "She's in the restroom and she's screaming". So there we were.....my wife and I in a tiny stall in the bathroom, and I could see the top of our little girls head crowning as Maggie was straddling the toilet," he wrote.

Robert writes that after asking the manager to call 911 and bring clean towels, he began to help Maggie deliver the baby.

"When she got to the shoulders, I realized the chord was wrapped around her neck TWICE. didn't want to alert my wife, so just told her try to relax for a minute and I was somehow able to unwrap the chord from the baby's neck," he wrote.

Fortunately, their baby girl - Gracelyn Mae Violet Griffin - was born healthy and without any other complications in the Chick-fil-A washroom.

As they waited for the paramedics to arrive, the Chick-fil-A staff warmed up towels to keep the baby cosy.

The incredible "Chick-fil-A birth", as it has come to be known, has amazed the Internet. "Wonderful! Loved reading every detail!" wrote one commenter. "Congratulations on such a beautiful baby girl" said another.

According to local reports, little Gracelyn Mae Violet Griffin has been offered free food by the franchise for life, as well as a guaranteed first job when she's old enough to start working.