Miraculously, the unnamed woman survived the 650-foot drop off the cliff - thanks to the snow breaking her fall. 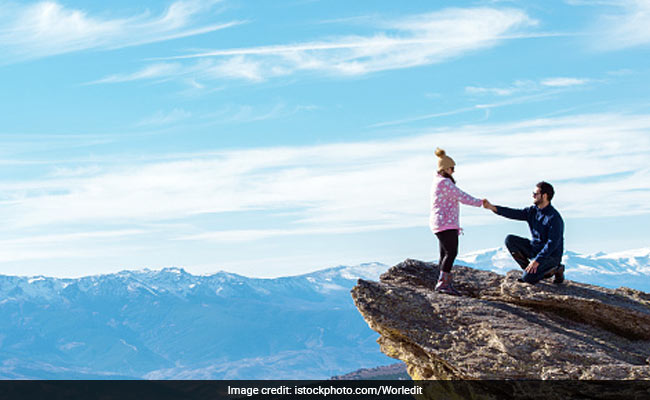 A woman slipped down a cliff in Austria shortly after accepting a proposal.

A romantic proposal ended in disaster for one couple as the woman fell down a 650-foot cliff moments after saying "yes". According to news website Bild, the incident occurred shortly after a 27-year-old man proposed to his girlfriend in Carinthia, Austria.

The woman, 32, accepted the proposal just moments before she slipped and plunged off the Falkert mountain on December 27. The couple had trekked up the mountain one day earlier.

Miraculously, the unnamed woman survived the 650-foot drop off the cliff - thanks to the snow breaking her fall.

Her partner, who tried to hold on to her, also lost his footing and fell 50 feet through the air. He was left gripping a cliff edge. Fortunately, they were both rescued after the woman was found lying motionless by a passerby, who contacted emergency services. Her fiance, meanwhile, had to be rescued by a helicopter from the cliff edge he was clinging on to.

"The two were extremely lucky! Had it not been for snow, it would have turned out very differently," a police officer at the scene said, according to the Daily Mail.

The two received medical treatment, and the man has been diagnosed with a vertebrate fracture.

This is not the first time that a romantic proposal has gone wrong. In September, a man's marriage proposal was ruined by a runaway boat that sent him tumbling into water.