"My worst nightmare," wrote one person 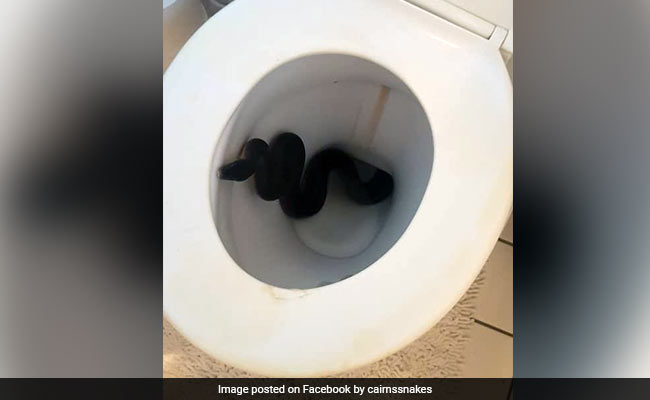 Nicole Errey discovered a water python in her toilet.

Finding a snake in your bathroom would be traumatic enough - but imagine finding two in two days. A woman in Australia got a shock on finding two pythons in her bathroom over the weekend. Nicole Errey from Cairns says that she came home from work on Friday and went to her bathroom. There, she saw the snake poking its head out from inside the toilet.

"I came in from work, went in to the bathroom ... my toilet lid was open - I looked and there was this dark thing in the toilet," Ms Errey said, according to Daily Mail.

Ms Errey immediately called Cairns Snake Removals, who later shared a picture of the huge water python on their Facebook page. They said that by the time they arrived, the snake had moved out of the toilet and reached the basin.

The nightmare, however, wasn't over.

The following day, Ms Errey's sister entered the bathroom and found another python there.

"I looked in and went, 'Oh, you got to be kidding me!'" she said, according to Daily Mail.

"What nightmares are made of," wrote Cairns Snake Removals, sharing a picture of the second snake. "Two nights in a row I have been called to the same Whitfield property for a snake in the toilet... In all my time I have pulled several snakes out of toilets. But never 2 in 2 days at the same address."

Their post has collected hundreds of shocked comments. "My worst nightmare," wrote one person. "How freaky," said another.

This isn't the first time that Australian snake removal services have been forced to pull pythons from toilet bowls. In 2018, Cairns Snake Removals said that they get snakes in bathrooms each dry season while sharing images of a python in a bathroom.

python in toiletcairnsSnake in toilet